by Tony Orji
in INews
Reading Time: 1min read
0
Share on FacebookShare on TwitterShare on Whatsapp 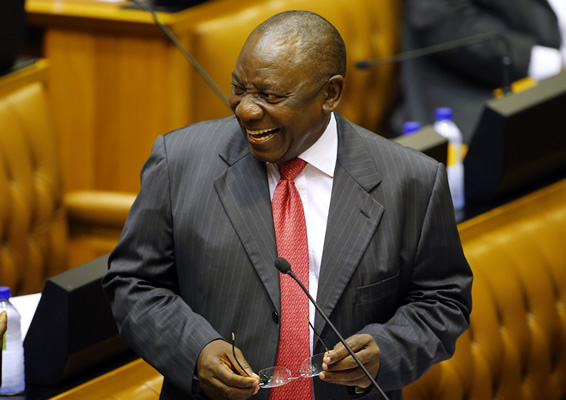 South African lawmakers on Thursday selected Cyril Ramaphosa as the
country’s new president after scandal-tainted Jacob Zuma resigned under
pressure from his own ANC ruling party.

Ramaphosa was chosen
without a vote after being the only candidate nominated, chief justice
Mogoeng Mogoeng told assembled lawmakers at a special sitting of the
parliament in Cape Town.

The announcement brought loud cheers from ANC lawmakers, with Ramaphosa due to address the parliament later during proceedings.

Zuma
resigned on Wednesday as the ANC finally turned against him after a
nine-year reign dominated by corruption scandals, economic slowdown and
plummeting electoral popularity.

Zuma railed against the ANC for
“recalling” him from office and — when he at first refused to resign —
then threatening to oust him via a parliament no-confidence vote.

In
an earlier TV interview on Wednesday, Zuma said he had received “very
unfair” treatment from the party that he joined in 1959 and in which he
had fought for decades against apartheid white-minority rule.

Zuma had been in a power struggle with Ramaphosa, his deputy president.

Zuma’s
hold over the ANC was broken in December when his chosen successor —
his former wife Nkosazana Dlamini-Zuma — narrowly lost to Ramaphosa in a
vote to become the new party leader.

Obasanjo to Buhari: Fight Corruption Under Your Nose