by Tony Orji
in INews
Reading Time: 4 mins read
A A
1
Share on FacebookShare on TwitterShare on Whatsapp 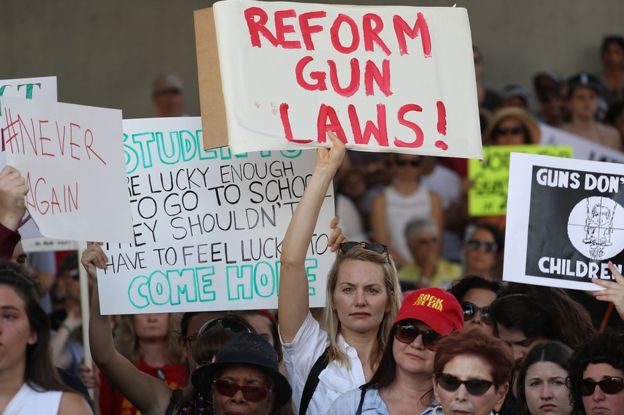 Protesters in Fort Lauderdale chanted “shame on you”, referring to US lawmakers and President Donald Trump.
He said last year he would “never” infringe on the right to keep arms.
Suspect
Nikolas Cruz has admitted carrying out the attack at the Marjory
Stoneman Douglas High School in Parkland, in which 17 people died.
It was the deadliest US school shooting since 2012 and has re-ignited long-running debates about tougher firearm restrictions.
In
his first public comments on the gun control issue since the attack, Mr
Trump blamed the Democrats for not passing legislation when they
controlled Congress during the early years of Barack Obama’s
administration.

What happened at Saturday’s rally?

Students
and their parents – as well as politicians – took part in the event in
Fort Lauderdale, close to Parkland. Thousands of people attended,
according to the Associated Press.
Arguably the most memorable
moment came when high school student Emma Gonzalez took to the podium
and attacked the US president and other politicians for accepting
political donations from the National Rifle Association (NRA), a
powerful gun rights lobby group.

“If the president wants to come up to me and tell me to my face that
it was a terrible tragedy and… how nothing is going to be done about
it, I’m going to happily ask him how much money he received from the
National Rifle Association,” said Ms Gonzalez.
“It doesn’t matter
because I already know. Thirty million dollars,” the 18-year-old said,
referring to donations during Mr Trump’s presidential campaign.
“To
every politician who is taking donations from the NRA – shame on you!”
said Ms Gonzalez, who took cover on the floor of her secondary school’s
auditorium during the attack.
Responding to her passionate speech, the crowds started chanting “Shame on you!”
According
to the Center for Responsive Politics, the NRA spent $11.4m (£8.1m)
supporting Mr Trump in the 2016 campaign, and $19.7m opposing Hillary
Clinton.

Ryan Deitsch, who was among those hiding in a school toilet during
the attack, urged lawmakers to pass more restrictive measures on gun
ownership.
“The least lawmakers can do is vote on something. What’s the worst that can happen?” the 18-year-old said.
Protesters also held placards that read “No more guns!” and “Enough!”
“Because of these gun laws, people I love have died,” said Delaney Tarr, a 17-year-old student.
“Where’s the common sense in that? People are dying every day.”

What is Mr Trump’s stance on gun control?

In a tweet late on Saturday, the Republican president accused the Democrats of not acting on gun legislation “when they had both the House & Senate during the Obama Administration.
“Because
they didn’t want to, and now they just talk!” he wrote, referring to
criticism from Democrats following Wednesday’s shooting.
Mr Trump – who on Friday met survivors of the attack – earlier blamed the shooter’s mental health.
The president’s views on gun control have shifted over time.
In recent years, he has pledged to fiercely defend the Second Amendment
to the US Constitution, which protects people’s right to keep and bear
arms.
Last year, he told an NRA convention he would “never, ever infringe” on that right. “The eight-year assault on your Second Amendment freedoms has come to a crashing end,” he said.

Saturday’s rally coincided with a gun show in Florida.
Hundreds of people attended the event at the Dade County fairgrounds, despite calls to cancel it.
“I
don’t believe that any law that they would have added would have
deterred what happened,” former law enforcement officer Joe Arrington
was quoted as saying by Reuters.
“I think a lot of agencies didn’t do their job necessarily like they were supposed to.”

What do we know about the suspect?

Mr Cruz, 19, is a former student at the Marjory Stoneman Douglas High School.
He
was reportedly investigated by local police and the Department of
Children and Family Services in 2016 after posting evidence of self-harm
on the Snapchat app, according to the latest US media reports.

Child services said he had planned to buy a gun, but authorities
determined he was already receiving adequate support, the reports say.
The reports come after the Federal Bureau of Investigation (FBI) admitted it did not properly follow up on a tip-off about Mr Cruz last month.
The
5 January tip was not the only information the FBI received. In
September, a Mississippi man reported to the law enforcement agency a
disturbing comment left on a YouTube video under Mr Cruz’s name.
Florida Governor Rick Scott called for FBI director Christopher Wray to resign over the failures to act. 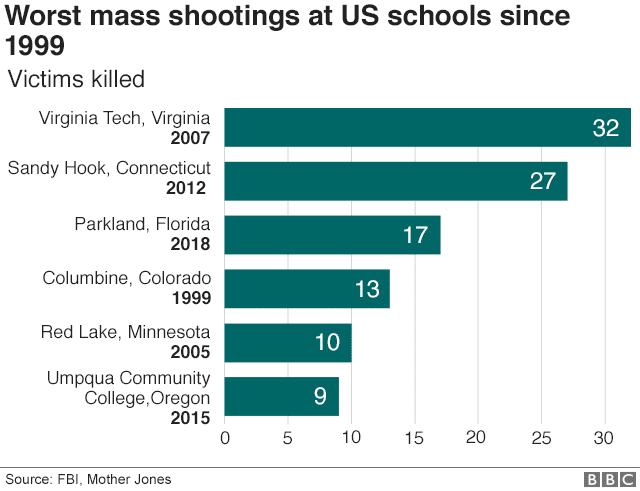 Don’t Let Worry Deny You Your Right To Happiness

Flight attendants share their tips for seat-swapping etiquette in air