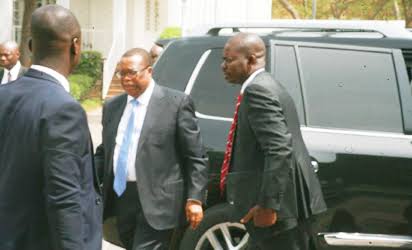 Two months after Ambassador Ayodele Oke was sacked as Director General
of the National Intelligence Agency [NIA] and two days after Ahmed
Rufa’i Abubakar was appointed as its new DG, another scandal hit the
intelligence agency at the weekend when $44million in cash kept in its
vaults in Abuja was removed to an unknown destination.

Daily Trust learnt from top security sources that
the money was surreptitiously removed even before the agency’s new DG
resumes duty.

Tracing the origin of the money, the sources
disclosed that the Jonathan administration released over $260million to
NIA as General Intervention Fund. At the time current Government
launched an investigation into the funds last year, only the cash
discovered in Lagos and the $44million lying in the Abuja vault remained
to be expended out of the original $260million, the sources said.

As
soon as it started its probe, the Osinbajo-led committee directed that
the money must remain in NIA’s vault as exhibit, Daily Trust learnt.The
sources however said, “While the money remained in the vault, certain
powerful forces mounted pressure on the acting DG, Ambassador Mohammed
Dauda, who was redeployed from Chad, to use the money since it is the
property of the NIA but the acting DG refused.”

According to our
sources, the “powerful forces” pushed very hard for the money to be
tampered with, saying government had forgotten all about it, but for the
firm resistance of the outgoing acting DG.

Our sources added,
“But barely two days after President Buhari named a substantive head for
the agency, a black bullion van was dispatched to NIA and the money was
removed to an unknown destination around 6am on Friday.

The team
that removed the money was accompanied by a serving military officer
who was posted to the intelligence outfit months ago as the finance
officer.” The total amount of money that was taken away from NIA’s
vaults on Friday was $44,285,996.

Daily Trust learnt that the
$43million that former DG Ambassador Ayodele Oke kept at an Ikoyi
apartment was part of the funds earlier released to NIA by the Federal
Government as General Intervention Fund. Oke was fired from his job in
October last year, six months after he was handed an indefinite
suspension following the discovery of the money at an Ikoyi apartment by
the Economic and Financial Crimes Commission, EFCC.

When a
whistle blower led EFCC to the money, NIA under Oke said the money
belonged to it and was meant for unspecified undercover operations.

An
investigative panel headed by Vice President Yemi Osinbajo probed the
matter and turned in a report to President Muhammadu Buhari which
indicted Oke in the scandal. Weeks after he received the report, Buhari
announced in October last year that he had accepted its recommendation
to terminate Oke’s appointment.

Secretary to the Government of
the Federation [SGF] Babachir David Lawal was also sacked on the same
day based on the same committee’s report, though for a separate offence.

When
Daily Trust contacted the acting DG Ambassador Mohammed Dauda
yesterday, he neither denied nor confirmed the allegation that money was
moved from NIA’s vaults.


He however promised to investigate the matter and get back to us, but did not do so before we went to press.
Tags: InspirationSocio-Economic Issues
ShareTweetSendShareSend
Previous Post