Open Letter To Aisha Buhari Over Cabal Controlling The Presidency

by Tony Orji
in Lifestyle
Reading Time: 6 mins read
A A
0
Share on FacebookShare on TwitterShare on Whatsapp 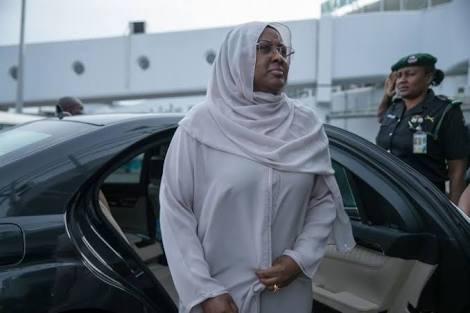 by Dele Momodu
Your Excellency, let me start by telling you that this letter is not
intended to flatter you but to show my profound appreciation, and that
of so many like minds, for your uncommon sagacity at a time it seems
wisdom has taken leave from most people in our dear beloved country and
they are more engaged in flights of fancy. You are a classic example of
that adage that says “behind every successful man is a woman.”

Let me assure you that,
you are in a class of your own. And I thank God for blessing Nigeria with your kind.

I
decided to write this letter only yesterday when I came across your
tweets, or retweets, of the Oak Television videos that have since gone
viral. I have never seen any wife of a Nigerian President who would
openly criticise a government in which she is a major beneficiary. I’m
even more surprised that you would voluntarily endorse and promote
videos that criticised your government on social media. You may not know
it but you’re setting new standards in our country. You shall be called
a quintessential pacesetter, when tomorrow comes. I have no doubt that
no matter what, when all is said and done, and the present
administration is long gone, you would have left behind a positive
enduring legacy, an epitome of womanhood and wifely rectitude. My prayer
continues to be that we will be able to say the same of your husband,
our dear President Muhammadu Buhari, notwithstanding the fact that he
now has little time to address and redress so many shortcomings.

I’m
certain that if your husband had listened to your wise counsel much
earlier he would have, probably, averted the mess in which he is
currently enmeshed. Your husband rode to power with so much love and
goodwill, the type we’ve not experienced since June 12, 1993, when Chief
Moshood Abiola won the Presidential election, fair and square. The
expectations were very high, in a similar fashion, in 2015, when
majority of the voters, including former critics of your husband chose
to support or vote for him. His was a miraculous resurrection. No one
expected him to waste such humongous goodwill at all and, nevertheless,
not so soon after his return to power. But before we blinked our eyes,
things had started falling apart. It took forever to assemble his team.
And when he finally did, many wondered why they could not have been
selected much earlier, given the nature and calibre of people selected.
Indeed, it was as if Nigerians expected that your choices were going to
descend from heaven and some angels were going to be appointed. The
government started losing steam and stamina from that moment.

Not
just that. Your husband’s ruling Party, APC, started a war of attrition
in the National Assembly. Some of his biggest supporters were suddenly
pounced upon and humiliated publicly while your husband kept a straight
poker face, as if he knew nothing or it was not any of his business.
This fierce battle inadvertently united and aligned some of his own
party faithful with the opposition and they even succeeded in sharing
very powerful positions with them. I’m sure your husband had been misled
into thinking he still had the power of life and death like he did as a
military Head of State after the overthrow of the Shagari regime in
1983. He also forgot an important characteristic of Nigerians, our
ability to forgive and forget easily. The same Nigerians who would shout
“crucify him” today are the same people who would scream “don’t kill
him” for various reasons, ranging from ethnicity to religion or even
pecuniary gains. There is also the quotalisation of corruption, a
situation where stealing enjoys Federal Character.

As if that
was not bad enough, the Nigerian economy suffered its worst cataclysmic
fall in decades, perhaps, because of the ill-informed decision of your
husband’s government to ban people from depositing United States Dollars
into their accounts. As interpreted by laymen like me, a country that
desperately needed an injection of foreign exchange into its Central
Bank was actually rejecting the medicine it badly needed. Maybe this was
the beginning of the end. All manner of freaky controls followed. Kids
who were schooling abroad began to suffer untold hardships. Those with
scholarships from home were being dishonoured. I remember writing a memo
to the President begging him not to offend those kids. Education had
always been a major investment in Nigerians and any attempt to deprive
our youths the best education at home and abroad was an invitation to
trouble. Before the decision was properly sorted, many young people had
given up on this government to protect their future. In a country that
found easy money for pilgrimages, it was very unfortunate that education
was never a priority.

You blew me apart when you found your
voice and spoke up openly and candidly and lamented the way your
husband’s government was shattering into smithereens. You were in a
position to know, and very right to tell the whole world, that your
husband was not in charge and that if the situation continued unabated,
you were not likely to support his second term bid. Though you were told
to mind your own business at the time, the point had been made so
eloquently and poignantly. Today, and looking back, it seems, you’re
indeed a prophet without honour at home. Everything you said has become
gospel truth.

One more example of your admonition to our
President. Why would he abandon the key figures who made his winning the
election possible? Those Party Chieftains who ensured his electoral
victory were either studiously ignored or conveniently abandoned. It was
as if the President had laboured alone on what had been a remarkable
collaborative effort. As you rightly noted, Ma, the people you started
seeing in the Presidential villa were strange faces that you didn’t see
in the heat of the battle. I’m aware of the personal efforts you made
reaching out to some of such people to appease them and assuage their
sore feelings. That is what every good woman and supportive wife should
do in the face of wanton disregard and disrespect of the gallant
warriors who fought to demolish the PDP behemoth when it was least
expected.

Today, the chickens have come home to roost. It
appears the President has suddenly woken up from his slumber or maybe
the mask of the evildoers has suddenly been lifted and the President we
all voted for has come back from the deep. Our President is now under
pressure to reach out frantically, and desperately, to the same people
who were used and dumped after that landmark election in 2015. The same
people you pleaded for and urged should be absorbed and assimilated into
an all-inclusive government of patriots who worked to enthrone
democratic principles and the change philosophy you became known as the
apostle of.

Now, the President is working extra hard, using
extra time and effort, to bring back some of those who have been
ostracised for no justifiable reason. Suddenly, he is now making
appointments which were pencilled in almost 3 years ago, leading to an
understandably botched exercise. The flaws notwithstanding, key national
institutions will be properly administered for the first time in your
husband’s tenure.

We hope that the necessary refinement of this list of appointees will
not take forever again. Time is fast spent and your husband will do well
to quickly confirm the authentic list and let those appointed get to
work. Others may see iit as largesse to the Party Faithful but why not.
However, as discerning administrators and observers will know, the
essence of these appointments is not just in rewarding Party members but
in your husband fulfilling his statutory and constitutional
responsibilities and not being seen as running an autocratic, exclusive
government. Every government that observes the rule of law and not
merely pays lip service to it is on the path of righteousness.

More
recently and commendably, Mr President is digging deep. He is now
interacting with the people that he needs to move the country forward
and ensure that he himself has a lasting legacy. It is gratifying to see
the President having meetings and dinners with members of his Party,
principal officers of the National Assembly and other key stakeholders.
God is indeed wonderful. Those who felt you were seeking relevance, and
personal comfort, have now realised your level of patriotism and love
for Nigeria, as those things that you yearned for and spoke out about at
great peril to your personal comfort and safety are now beginning to
happen.

It is my prayer that you will yet have the last laugh over the
ignominious cabal that seemed to have held your husband hostage and
attempted to strangulate our nation in the process. You are a woman of
virtue and honour and Nigerians can’t appreciate you enough. So this
weekend, on behalf of my fellow citizens I say bravo and doff my heart
to a gentle Amazon, beautiful soul, visionary woman and invite my fellow
Nigerians to do the same!

May God continue to bless and protect you and your family.

STRANGE: Bride Strips Herself At Her Wedding Due To Spiritual Manipulation—God have mercy