by Tony Orji
in Socio-Economic Issues
Reading Time: 4 mins read
A A
0
Share on FacebookShare on TwitterShare on Whatsapp 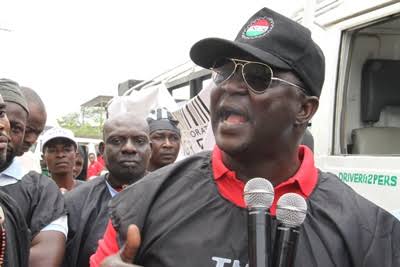 The Nigeria Labour Congress (NLC ) has said that the failure and
inability of President Muhammadu Buhari led government to address the
infrastructural deficit and other related problems, especially in the
oil industry has dashed the hope placed on the change promised Nigerians
by the APC led government.

The congress said Nigerians have continued to be at the receiving
end, with over 4 million Nigerians losing their job in 2017 according to
statistics provided by the National Bureau of Statistics as against the
three million jobs annually promised by APC.

In
his new year message to Nigerians, NLC President, Comrade Abubakar
Wabba lamented that rather than work to create jobs and improve the
condition of Nigerian working people and Nigerians in general, leading
elements in the ruling APC government, like Governor Nasir el-Rufai,
have been taking measures to further chastise and ruin Nigerians by
throwing tens of thousands of workers into the already saturated
unemployment market and wretchedness.

According to him, 2017 saw
the working people, pensioners and other Nigerians facing series of
daunting socio-economic and security challenges, “even though we had
hoped that the year would offer succour for the masses of the people.”

Wabba
said the deplorable economic situation in 2017 is aptly captured by the
statistics recently released by the National Bureau of Statistics (NBS)
which indicated that over 4 million Nigerians lost their jobs in 2017.

He
said: “Against the background of the campaign promise of the ruling All
Progressives Congress (APC) government to create three million jobs
annually, this statistics from the NBS underscores the grave and
depressing situation of the Nigerian economic landscape in 2017.

“Rather
than work to create jobs and improve the condition of Nigerian working
people and Nigerians in general, leading elements in the ruling APC
government, like Governor Nasir el-Rufai, have been taking measures to
further chastise and ruin Nigerians by throwing tens of thousands of
workers into the already saturated unemployment market and wretchedness.

“In
the same vein, despite the huge revenue that the states have received
through the Federal Government intervention funds to clear arrears of
unpaid salaries and pensions in many states of the federation, coupled
with additional payment of three tranches of windfall, (Paris Club debt
refunds), states like Kogi, Osun, Benue, Ekiti, Bayelsa and several
others entered 2018 with huge arrears spanning up to ten (10) or more
months of wages and pensions.

“Under these conditions, Nigerian
workers, pensioners and their families remained the most despondent
group in an economy that even the well-to-do are groaning and struggling
to survive. No wonder, our country is one of the worst, known for
having many hungry people in the world according to the World Hunger
Index report 2017.”

He stressed that in recent times, Nigerians
have witnessed one of the worst shortages in the supply of petrol in the
history of the country in spite of Federal Government’s repeated claim
that with the complete removal of subsidy on petroleum products,
scarcity of petroleum products would become a thing of the past.

Wabba
said that the position of the congress regarding the prevailing
situation in the petroleum industry has been that the crisis in the
industry is due to the inability or refusal of our ruling elite to
refine all petroleum needs in Nigeria, adding that Nigeria remain the
only major producer of crude oil in the world that depends on
importation of refined products from abroad.

He said “For us in
the Congress, and for majority of working people in Nigeria, the hope
placed on the capacity of President Buhari to bring about positive
change is being undermined by his government’s inability to address the
infrastructural deficit and other related problems in the oil industry,
such as making our existing refineries work at optimal capacity by
refining products for domestic consumption.

“Not only is
government unable to achieve this for almost three years now, but moving
forward more refineries, especially modular refineries which can be
built between 12 and 18 months are required to address the reoccurring
challenge of fuel scarcity and price hike in Nigeria and stop the
exploitation of ordinary Nigerians. The inherent corruption in the
system has made this impossible for more than three decades and should
be addressed headlong.”

On the new minimum wage, Wabba said the
tripartite committee recently inaugurated should expeditiously conclude
its assignment and ensure that a new minimum wage is put in place before
the third quarters of the year and urged the National Assemboy to give
accelerated hearing g to the bill that will be produced by the
committee.

“We therefore call on
the State Houses of Assembly to demonstrate courage, patriotism and
assert their desired independence by passing these constitutional
amendment bills designed towards emancipating our local governments and
freeing their finances from being usurped by governors who are
determined to truncate the quest for democratisation at the local
government level.”

Wabba wants the National Assembly and State
Houses of Assemblies to ensure that payment of primary school teachers’
salaries is put on first line charge of the Federation Account to
assuage the fears of all stakeholders in the local government system.

“Over
the years, the Congress has advocated for good governance as a basis
for sustainable development of our country. We have in similar tone
campaigned against corruption in our body politics, as this malady has
remained the greatest impediment to our quest for national development.

“We
believe that the ascendancy of the APC to power was rooted on the
personal integrity and anti-corruption pedigree of President Buhari. As
we move into 2018, our expectation is that the executive arm of
government would push for the implementation of key anti-corruption
protocols and good governance principles in our public and private
institutions.

“In the same vein, we call on the government to
increase the tempo of the fight against corruption in a way that is
fair, just and all encompassing.”