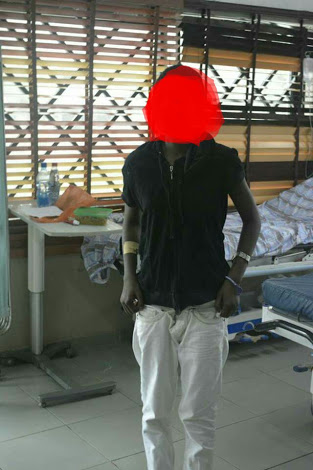 It will only take the grace of God for Timilehin Idowu to get over her
present state of mental and psychological trauma, having, probably,
fallen a victim of rapists and possible ritual demons in human skin.

Towards this end, a combination of marathon prayer session and
medical exploits are being conscientiously directed towards her
resuscitation by kind-hearted leadership of Living Faith Church prayer
warriors and medical experts.

Timilehin
became a patient in the Emergency Ward of Covenant University Hospital,
within the Faith Living Church also known as Canaan Land on Sango-Owode
Road in Otta, Ogun State, on August 25, 2017, ostensibly after the devil
incarnates had consummated their machinations on her

Crimepuzzle
can authoritatively report that, her captors had cashed in on the
evangelism program of the founder of the church, Bishop David Oyedepo,
who takes his soul winning agenda to market places while his wife,
Faith, sticks to the open entry point of the church.

However, on
August 25, while she was preaching and offering prayers to the
multitude at the point, little Timilehin was presented to her for
spiritual upliftment. There and then she got to know that her case was
more than ordinary.

After praying for her, she was only able to
mention her name and since then, had remained silent over further
questions that could lead tracing her relations, due to loss of memory
but vehemently exhibits her scary detest for men.

According to
one of the nurses attending to her, “Since she cannot bath herself, we
bathe her, but she will not allow us clean her up to her private part,
suggesting that she must have been raped, coupled with the fact that at
every point, she looks calm but becomes restive on the sight of any man”

On why the doctors couldn’t carry out a test on her to
ascertain if she was actually raped, even if it required sedating her,
the nurse said, “The medical director is being careful in giving her
sedative, more so that she might have been drugged by her captors,
sedating her may compound her issue. One thing we know is that, with
time, we shall get there”.

“She is between the range of 13-16 years of age, light in complexion, about 5.1 feet, and without any tribal mark

“The
Command appeals to the general public or anyone who has useful
information about her relatives, to please contact DPO, Onipanu
Division”, Oyeyemi added.

Your Best Defense Against The Enemy