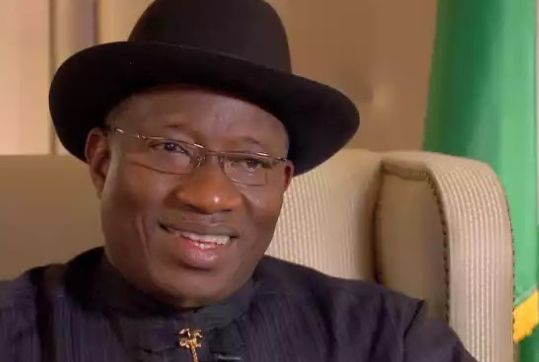 He contested and lost the 2015 presidential election, upon which he
conceded defeat and became the first sitting Nigerian president to do
so. Jonathan’s term as President of Nigeria ended on 29 May 2015, with
Muhammadu Buhari becoming the new president.

Early life and education
Jonathan
was born in what is now Bayelsa State to a family of canoe makers.
Jonathan holds a B.Sc. degree in Zoology in which he attained Second
Class Honours. He holds an M.Sc. degree in Hydrobiology and Fisheries
biology, and a PhD degree in Zoology from the University of Port
Harcourt. Before he entered politics in 1998, he worked as an education
inspector, lecturer, and environmental-protection officer.

Personal life
Jonathan and his wife Patience have two children. He is a Christian, and he comes from the Ijaw ethnic group.

In
2007, President Jonathan declared his assets worth a total of ₦
295,304,420 Naira ($1,845,652 USD). However, on 9 October 2014, the
richestlifestyle.com website ranked Mr Jonathan sixth on its list,
claiming his net worth was about $100m (£62m). He threatened to sue the
website, claiming it “was an attempt to portray him as corrupt.” The
page was removed, but was then published by another website which
estimated Jonathan’s net wealth at $10 million.

Governor of Bayelsa
On 9 December 2005,
Jonathan, who was Deputy Governor at the time, was sworn in as Governor
of Bayelsa State upon the impeachment of the current Governor Diepreye
Alamieyeseigha by the Bayelsa State Assembly after being charged with
money laundering in the United Kingdom. In September 2006, Jonathan was
marred by reports released by Wikileaks claiming his wife was indicted
for money-laundering by Nigeria’s anti-crime agency, the Economic and
Financial Crimes Commission (EFCC). The report proved to be false. The
head of the EFCC stated that “Mrs. Jonathan was not in any way involved
in any case of money laundering investigated by the EFCC”.

Vice-presidency As
Vice-President, Jonathan took a very low profile. While recognising the
constitutional limits of the Vice-President’s office, he participated
in cabinet meetings and, by statute, was a member of the National
Security Council, the National Defence Council, the Federal Executive
Council, and was the Chairman of National Economic Council.

Vice-President
Jonathan was instrumental in negotiating an agreement with many of the
major militant groups in the Niger Delta, who were mostly his fellow
Ijaws, to lay down their weapons and stop fighting as part of a
government amnesty.

Acting president On 9 February 2010, a
motion from the Nigerian Senate invested Goodluck Jonathan as acting
President of the Federation because President Yar’Adua went to Saudi
Arabia in November 2009 for medical treatment.[18] On 10 February 2010,
during his first day as acting president, Jonathan announced a minor
cabinet reshuffle. Prince Adetokunbo Kayode, who was the Labour
Minister, was named Minister of Justice, to replace Mr Mike Aondoakaa.
Aondoakaa was named as the Minister of Special Duties, and his
counterpart Ibrahim Kazaure was named Minister of Labour.

In accordance with the order of succession in the Nigerian
constitution following President Umaru Yar’Adua’s death on 5 May 2010,
Vice-President Goodluck Jonathan was sworn in as the Acting President of
the Federal Republic of Nigeria on 6 May 2010, becoming Nigeria’s 14th
Head of State. He cited anti-corruption, power and electoral reforms as
focuses of his administration. He stated that he came to office under
“very sad and unusual circumstances”.

On 18 May 2010, the
National Assembly approved Jonathan’s nomination of former Kaduna State
governor, Namadi Sambo, for the position of Vice-President.

2011 presidential campaign and elections
On
15 September 2010, Jonathan announced on Facebook that he had decided
to run for public office on his own for the first time, in the race for
the presidency of Nigeria in 2011.

In the contest for the Peoples
Democratic Party nomination, Goodluck Jonathan was up against the
former vice-president Atiku Abubakar and Mrs. Sarah Jubril. On 13
January 2011 the primary election results were announced in Eagle
Square, Abuja. Jonathan was declared winner with a victory in two-thirds
of the states of the Federation counted.

For the general
election in 2011, Jonathan and Vice-President Sambo attended political
events and travelled the country to campaign for the nation’s highest
office. Jonathan won the general election against General Muhammadu
Buhari and his running mate Pastor Tunde Bakare with 59% of the votes.
On 18 April, Jonathan was declared the winner of the election.
Major initiatives

Historically,
the Nigerian Power Sector has been plagued by blackouts. Economists
estimate that power outages have cost Nigeria, Africa’s biggest economy,
billions of dollars in imported diesel for generators and lost output.
In a study conducted by the World Bank, a lack of access to financing
and electricity were cited as Nigeria’s main obstacles to development,
surpassing corruption. President Jonathan has overseen the privatisation
of Nigeria’s power sector with the end goal being the establishment of
an efficient and reliable power supply infrastructure for the Nigerian
population. The Power Holding Company of Nigeria, which acted as the
nation’s electricity provider, has been broken up into 15 firms, with
Nigeria handing over control of state electricity assets to 15 private
bidding companies. The Nigerian government contracted for the services
of CPCS Transcom Limited, a Canada-based consulting firm specialising in
transportation and energy infrastructure projects, to act as the
transaction adviser for the handover of state electricity assets.

Youth Enterprise with Innovation in Nigeria
On
11 October 2011, President Jonathan launched the Youth Enterprise with
Innovation in Nigeria (YOUWIN) Initiative which he stated would be an
innovative business plan competition that harnesses the creative
energies of young people between the ages of 18 and 35. The YOUWIN
Initiative is expected to create between 40,000 and 50,000 sustainable
jobs by 2014.

Lead poisoning incident
In January 2013,
Jonathan reportedly promised $4 million to assist in cleaning up
villages that have been affected by a lead poisoning incident. Over 400
children have died and Human Rights Watch said that releasing the funds
“could be lifesaving for countless children.”
Transformation Agenda

In
2011, President Jonathan launched the Transformation Agenda. The Agenda
is based on a summary of how the Federal Government hopes to deliver
projects, programmes, and key priority policies from 2011 to 2015,
coordinated by the National Planning Commission (NPC).

On 11
September 2013, President Jonathan sacked the creator and coordinator of
the Transformation Agenda, Shamsudeen Usman, the Minister of National
Planning, along with eight other cabinet ministers amid a rift in the
People’s Democratic Party (PDP).

Foreign policy
According
to President Jonathan, Nigeria’s foreign policy was reviewed to reflect
a “citizen-focused” approach, designed to “accord this vision of
defending the dignity of humanity the highest priority” and connect
foreign policy to domestic policy, while placing a greater emphasis on
economic diplomacy.

2015 presidential campaign and elections
On
31 March 2015, Jonathan conceded the election to challenger Muhammadu
Buhari, who was sworn in to succeed him on 29 May 2015. Jonathan said in
a statement he issued on 31 March 2015 that “Nobody’s ambition is worth
the blood of any Nigerian.”