Buhari Made Me To Take Salary Cut, says Osinbajo 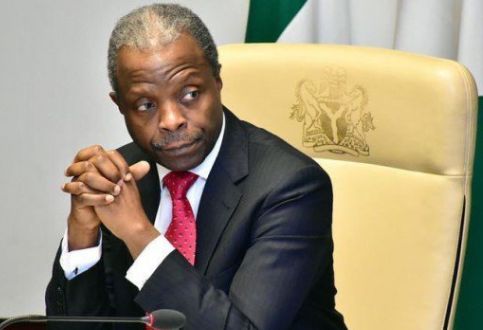 Vice-President Yemi Osinbajo on Thursday said the decision by President
Muhammadu Buhari to take only half of his salary was what made him (the
Vice-President) to do same.

He said he also failed in his attempt to convince Buhari to donate the half salary he rejected to him (Osinbajo).

Osinbajo said this at the public presentation of a book, “Making Steady,
Sustainable Progress for Nigeria’s Peace and Prosperity” at the old
Banquet Hall of the Presidential Villa, Abuja.

He spoke about Buhari’s frugality, saying he does not believe in amassing wealth at the detriment of those he is leading.

Osinbajo said, “Some things have not been included in the book and I
might just supply some of that. One of such things is the exemplary
frugality, the honesty and humility, and sense of humour of Mr.
President.

“That frugality can sometimes be a problem. As you know, Mr. President
decided that since government provides accommodation, food and
transportation for the President and the Vice-President, we didn’t need a
full salary.

“Now, how much is this salary by the way? It is public knowledge and I
think it is N1, 750,000.00 or so, which is under N2m. He said he would
take only half of his salary and so I had no choice but also to take
half of my own salary.

“Unfortunately, Mr. President turned down my request, to give the other
half to a worthy cause – his Vice-President. He didn’t consider me a
more worthy cause to give half of his salary!

“In a country where politicians sometimes want to be as wealthy as
Dangote, it is refreshing to have a President who most people won’t even
dare to discuss any private benefit on a project with let alone a bribe
or a kick-back.”

While describing corruption as Nigeria’s major problem, he said the
menace was the main reason for the depletion of the nation’s resources,
such that the country had no savings when oil prices fell.

Osinbajo said it was the prudence and honesty of the President that
ensured that despite the economic downturn, the Federal Government was
able to support the states, spend N1.3trn on capital expenditure, the
largest in the history of the nation, and also ensure it met all other
obligations.