Story of Maina’s Return & Escape: The Audacity of Corruption

by Tony Orji
in Socio-Economic Issues
Reading Time: 5 mins read
A A
0
Share on FacebookShare on TwitterShare on Whatsapp 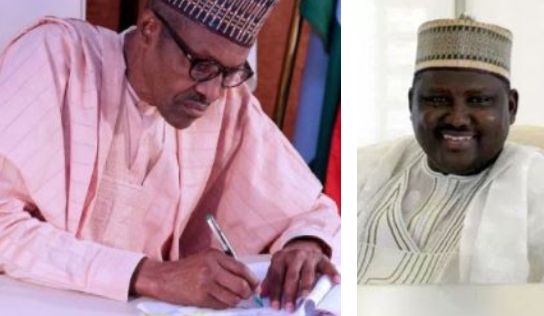 Abandoning his trademark reticence, President Muhammadu Buhari acted
decisively on Monday by ordering “the disengagement of Abdulrasheed
Maina,” the former chairman of the Presidential Pension Reform Task
Team, from service.
But before then, the damage had already been done to his sanctimonious crusade against corruption.
Maina’s reinstatement to the post of a director in the Ministry of
Interior has generated outrage since it became public knowledge at the
weekend through an online newspaper report.

He was accused of serious fraud over pension funds after he was
entrusted with the task of cleaning up the mess in 2010. However,
Maina’s sacking and the directive to investigate the circumstances of
his reinstatement are an opportunity for President Buhari to get to the
root of the huge pension fraud and refocus his waning anti-corruption
campaign.

Throughout the weekend, the audacity of Maina’s reinstatement fittingly
dominated national discourse. By some accounts, Maina had allegedly
stolen N195 billion of pension funds at a time pensioners were dying
needlessly, waiting to be paid their entitlements. For this, the police
had declared him wanted in 2012. But apparently wielding his influence,
he had neutralised all efforts to have him to answer questions about his
controversial tenure at the PRTT.

In the ensuing imbroglio, the Economic and Financial Crimes Commission
also declared Maina wanted in July 2015 and Interpol in February, 2016
over the same scam. The EFCC had charged him to court alongside a former
Head of Service, Steve Oronsaye, and two others over alleged biometric
pension fraud of N2 billion. While the other accused persons appeared in
court, Maina absconded and after some time, he reportedly fled the
country. Therefore, the then Goodluck Jonathan government ordered the
Federal Civil Service to terminate his appointment for absenteeism. The
uproar over his reinstatement, double promotion and secondment as a
director is therefore not unexpected.

Let’s get the facts straight. Maina could not have acted alone in this
saga. Winifred Oyo-Ita, the HoS was initially reported to have written
the letter of secondment to the office of Abdulrahman Dambazau, the
Interior Minister. The HoS is the custodian of civil service rules and
could not have acted secretly in a case that has attracted public
attention. As of Monday, Maina was still a wanted person on the official
website of the EFCC, rendering the first responses by the HoS’
spokesman and the minister evasive and complicit. The case got messier
on Monday when Oyo-Ita flatly denied ever posting Maina to the ministry
as claimed by Dambazau.

Maina first came to public consciousness as an instrument for cleansing
the monumental fraud and outright stealing that were being perpetrated
in public pensions and he quickly went to work, claiming back then in
2012 that about N3.3 trillion might have been released by the Federal
Government since 1976 without being accounted for. The details were
shoddy.

But Buhari was elected President in 2015 on a promise of combating the
blight of Boko Haram terrorism and corruption. He has professed for too
long to be morally offended by the level of corruption on Jonathan’s
watch. Far much more than his opponents could ever dream, however, the
President has damaged his own reputation for integrity, compromised the
anti-corruption war and dashed hopes that he would be a unifying figure
in a fractured, divided nation. His swift response to the Maina scandal
is uncharacteristic and the scandal might never have happened if he had
acted so decisively in the past.

There has been a serial condoning of corruption when it comes close to
home. The Chief of Army Staff, Yusuf Buratai, and Dambazau were alleged
to have acquired unexplained wealth, as was his controversial Chief of
Staff, Abba Kyari. He brushed these aside just as he initially ignored
allegations of corruption against the Secretary to the Government of the
Federation, Babachir Lawal, who was later indicted by a Senate probe
panel. Even after eventually suspending Lawal and receiving a separate
probe report of a presidential three-man panel headed by Vice-President
Yemi Osinbajo on the SGF and on Ayo Oke, the suspended chief of the
National Intelligence Agency, in whose custody $43 million and other
cash were found, Buhari has sat on the report.

When Abdulmumuni Jibrin, a former chair of the House of Representatives
Appropriations Committee, blew the lid on how budgets had been padded by
billions of naira to corruptly enrich lawmakers, even confessing to
being a beneficiary, the government failed to move against the House
Speaker, Yakubu Dogara, and other principal officers, instead, using the
police to harass the whistle-blower. The government thus missed a
golden opportunity to break a system that enables lawmakers to annually
cream off up to N100 billion through the notorious constituency projects
scam in the lower chamber.

Corruption was on the march again when Isah Misau (a senator) recently
accused the Inspector-General of Police, Ibrahim Idris, publicly of
failing to account for over N10 billion monthly earned from special
security postings, among others. Again, instead of using this lead to
resolve the contentious issue of over 100,000 policemen being assigned
to individuals and corporate bodies and the monies levied on them, the
Attorney-General of the Federation, Abubakar Malami, curiously filed
criminal charges against Misau.

Similar cronyism has been playing out after the outcry by Ibe Kachikwu,
the Minister of State for Petroleum Resources, who alleged that Maikanti
Baru, the Group Managing Director of the Nigerian National Petroleum
Corporation, had been sidelining him as chair of the board, made
appointments and entered into $25 billion transactions without the
board’s approval. Rather than insist on due process and build
institutions, the Presidency has sided with Baru, denying allegations of
corruption when in fact, Kachikwu only complained of procedural wrongs
and not corruption.

The sacking of Maina is not enough. A report of how the Maina
shenanigans was orchestrated, which the President directed to be done
and forwarded to his Chief of Staff by the close of work on Monday,
should not be another window dressing. It is obvious that it took the
effrontery of highly placed, tainted government officials to pull off
this absurdity. The offices of the HoS and Dambazau, have been fingered.
This is an abuse of office, an embarrassment of immense proportions to
the Federal Government, which should claim the scalp of those found
culpable.

We must not lose focus of the victims of these crimes: the hapless
pensioners. Buhari should act on the report without delay to allay the
fear of those who might suspect an official seal to Maina’s recall. To
start with, the fugitive must be made to face justice. The EFCC, which
still maintains that he is a wanted person “for offences bordering on
procurement fraud and obtaining by false pretences,” should seize the
moment and get him and his accessories arraigned in court.

Maina’s secret return sent another powerful signal that Nigeria is being
ruled by a crooked cabal. Buhari’s leisurely, distracted style of
governance has allowed a coterie of self-seekers and sectional bigots to
hijack governance and act badly in his name. A leader’s integrity is
only fully tested when he is called upon to act when those close to him
are offenders; not when opponents are the culprits.

Buhari should change gear or come out completely discredited. He should
investigate the veracity or otherwise of the deluge of complaints
against his top aides and other associates that are reported to exert so
much influence despite holding no official positions. As Tam
David-West, a former Petroleum Minister, once advised, Buhari needs to
clean up his house. He should know he is acting with impunity by
ignoring allegations of corruption against members of his kitchen
cabinet.