Apply Now! VACANCY FOR THE POSITION OF HEAD OF TRAINING AND RESEARCH, AFRICAN INSTITUTE FOR ECONOMIC DEVELOPMENT AND PLANNING (IDEP)

by Tony Orji
in INews, Jobs and Vacancies, News, Socio-Economic Issues
Reading Time: 3 mins read
A A
3
Share on FacebookShare on TwitterShare on Whatsapp 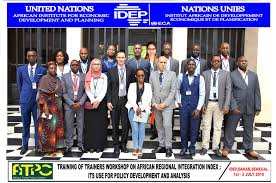 The African Institute for Economic Development and Planning (IDEP), located in Dakar (Senegal), is headed by a Director and is accountable to the Deputy Executive Secretary (Programme). IDEP is a subsidiary and training arm of ECA and is responsible for improving public sector management and development planning in support of member States’ structural transformation. The core functions of IDEP are as follows: contributing to enhancing the capacity of member States for better participatory development planning, including long-term visioning, sectoral policy design and planning and urban and regional planning; contributing to strengthening the capacity of member States to develop and adopt better approaches to economic policy formulation, management, monitoring and evaluation; contributing to enhancing the capacity of African countries to autonomously deploy development planning tools to achieve structural transformation of their economies and societies; and investing in capacity development, advisory and policy dialogue programmes and activities targeted at the mid-career and senior officials of African Governments, with special attention given to the next generation of younger professionals and women officials.

This position is located in the African Institute for Economic Development and Planning (IDEP) of the United Nations Economic Commission for Africa (ECA), located in Dakar (Senegal).

The United Nations Economic Commission for Africa (UNECA) is calling for applications for the position of the position of Head of Training and Research, at the African Institute for Economic Development and Planning.

All applications should be made via the online application system at: https://careers.un.org/lbw/jobdetail.aspx?id=156783

The deadline for application is Sunday, 22nd August, 2021.