by Tony Orji
in INews, News, Sports Update
Reading Time: 1 min read
A A
0
Share on FacebookShare on TwitterShare on Whatsapp 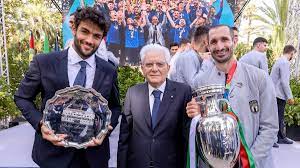 The honours were “a sign of recognition of the sporting values and national spirit that animated the Italian victory at the European championship,” a statement from the Italian residential palace said on Friday.

Captain Giorgio Chiellini was named an ‘Officer’ and along with all the team were given the honour of ‘Cavaliere’ (Knights).

Italy beat England last weekend on penalties in London to win the title for the first time since their victory in 1968.

Must Read! Natural Remedies: How to use Onion peel to make healthy tea drink