by Tony Orji
in INews, News, Scholarships
Reading Time: 4 mins read
A A
3
Share on FacebookShare on TwitterShare on Whatsapp 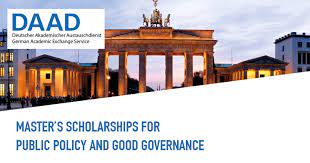 The DAAD Helmut-Schmidt-Programme Masters Scholarships for Public Policy and Good Governance Programme offers very good graduates from developing countries the chance to obtain a Master’s degree in disciplines that are of special relevance for the social, political and economic development of their home country at German institutions of higher education.

The scholarships are awarded for selected Master courses at German institutions of higher education listed below:

The courses have an international orientation and are taught in German and/or English.

DAAD scholarship holders within the Helmut-Schmidt-Programme are exempted from tuition fees. DAAD pays a monthly scholarship rate of currently 861 €. The scholarship also includes contributions to health insurance in Germany, appropriate travel allowance, a study and research subsidy as well as rent subsidies and/or allowances for spouses and/or children where applicable.

Prior to their study programmes, all scholarship holders will also receive a 6- months German language course.

The most important selection criteria are:

The following groups are not eligible:

•  Applicants who obtained their most recent higher education degree more than six years before submitting their application.
• Applicants who have resided in a country that is not included in the DAC list of developing and emerging countries for more than 15 months at the time of the application deadline.

All Master courses have further additional requirements that must be fulfilled by the applicants at any case.

Please submit your applications for the selected master`s courses and for the DAAD scholarship to the respective universities only (not to DAAD). You must indicate that you are applying for the DAAD Helmut-SchmidtProgramme (Master’s scholarships for Public Policy and Good Governance). The application period at all 8 universities lasts from 1 June – 31 July 2021.

It is important to read the 2022 Announcement and visit the official website (found below) to access the application form and for detailed information on how to apply for this scholarship.