by Tony Orji
in INews, News
Reading Time: 2 mins read
A A
0
Share on FacebookShare on TwitterShare on Whatsapp 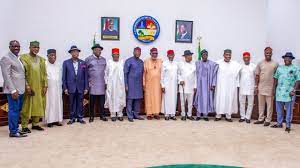 The Southern Governors’ Forum has placed a ban on open grazing of cattle across the southern region after a meeting in Delta State on Tuesday, May 11, 2021.

Governors of the south west region had announced a similar ban in January, citing security concerns sparked by open grazing.

Conflict between herders and farmers caused by open grazing has led to the death of hundreds of people and displacement of thousands from their local communities.

Governors on Tuesday noted with concern the incursion of armed herders and criminal bandits into the south, escalating insecurity that has hampered citizens from living their normal lives.

The governors said development and population growth has put pressure on limited land resources, increasing the prospects of conflict with nomadic herders.

“Given this scenario, it becomes imperative to enforce the ban on open grazing in the south (including cattle movement to the south by foot),” the 17 governors said in a communique released after the meeting.

The governors recommended that the Federal Government should support states willing to develop alternative and modern livestock management systems.

The Federal Government’s previous attempted interventions into the contentious issue have failed to provide a lasting solution as some governors have accused them of trying to force controversial initiatives on them.

Tuesday’s decision was taken off the back of growing insecurity that has plagued many parts of Nigeria.

Among a list of other resolutions reached by the governors was for President Muhammadu Buhari to address Nigerians so as to restore confidence in his leadership.

They demanded state police, a review of revenue allocation formula, and creation of other institutions to give more power to sub-national governments.

They also called for a review of appointments into Federal Government agencies to reflect federal character, and urged the Buhari-led government to urgently organise a national dialogue.

They also recommended the activation and establishment of ports in other states so as to ease the burden on the Lagos port, and create new jobs and boost economic activities.

The governors affirmed that they remain committed to the unity of Nigeria on the basis of justice, fairness, and peaceful co-existence.