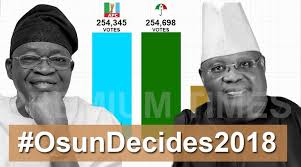 The Election Petition Tribunal now hearing the petitions arising from
the Osun State governorship election has granted an ex parte order to
Senator Ademola Adeleke, restraining INEC from altering the original
election results as well as information contained in the Card Reader
machines and other documents used for the election.

The tribunal, which is headed by Justice T.A.
Igoche and also has Justice P. A. Obayi as member, granted this order in
Osogbo on Thursday during its sitting before the commencement of
pre-hearing session.

Adeleke, governorship candidate of the PDP
had, through his counsel, Mr. Nathaniel Oke (SAN), filed an ex parte
application seeking leave of the tribunal to file the application before
the pre-hearing session.

The applicant also sought leave of the
tribunal to inspect and obtain certified true copies of electoral
documents and materials in the custody of INEC; an order to conduct
physical inspection and verification of electoral materials and
machines, as well as used and unused ballots, among others.

Adeleke
also applied for an order to compel the INEC to produce and print out
list of permanent voter card distribution statistics per polling units
and an order restraining INEC from altering extracted information from
card readers, election results from polling unit level to state level,
as well as ballot papers used for the conduct of the governorship
election in Osun State.

Other grounds of the application are:

“That the 1st applicant was the winner of the election and ought to have been so declared by the 3rd respondent (INEC).

“That the 3rd respondent declared the election inconclusive hence a rerun was conducted on the 27th day of September 2018.

“That
the rerun election was marred by electoral violence, vote-buying,
stuffing of ballot papers, multiple thumb-printing and voting and
allocation of votes by the 3rd respondent. That by the total actual and
valid votes cast on the 22nd and 27th days of September 2018
respectively, the elections were won by the applicants.

“That an
examination of the electoral documents and election materials in the
custody of the 3rd respondent is required to determine the actual facts
and records of the elections to maintain this petition.

“The 1st and 2nd applicants
are dissatisfied with the said result of the election as announced by
the returning officer of the governorship election, Osun State. That
instant allocation is required for the purpose of instituting and
maintaining the petition.”

The panel, having listening to the
application moved by Adeleke’s counsel held in their ruling that the
allocation had merit and granted the order.

See How This Man Is Risking His Life; Hanging & Eating