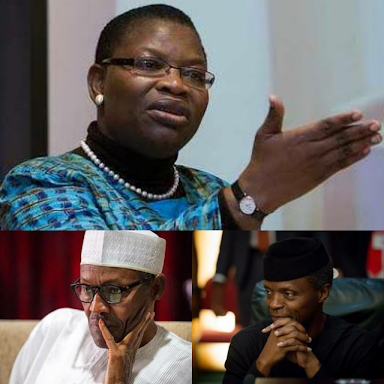 She said Buhari’s legacy is the destruction of Nigeria’s wealth.

Speaking at the ACPN press conference in Lagos on Monday, and unveiling
her party’s roadmap for winning the 2019 presidential elections,
Ezekwesili said “Let us talk about the present administration; what is
the primary legacy of President Muhammadu Buhari? It is the destruction
of our nation’s wealth — presiding over the worse economic recession
Nigeria has seen in decades,” she said.

“Even now that the
economy has come out of recession, the growth is as sluggish as its
government. Four out of every 10 adults are either unemployed or
underemployed and Nigeria is now the poverty capital of the world.

“In
the midst of this, its vice-president was celebrating last week at the
Nigerian Economic Summit (NES24) that handing bailouts to state
governors who cannot pay salaries is an achievement.

“Wow, what a big shame, what a colossal shame!”.
She
said she is now a politician and she’s in the polity as a candidate, so
Nigerians no longer have to choose between “the devil and the deep blue
sea”.

Ezekwesili, who served as vice-president of the World
Bank, said she was a cabinet member before she was 40 years old, adding
that power has never and can never confuse her.

She said she terminated the powers of the minister — her own power as a minister — to discretionarily allocate mining licences.

The
former minister, who said that she understands economics and
nation-building, said she will lift a minimum of 80 million Nigerians
out of poverty if voted into power in 2019.