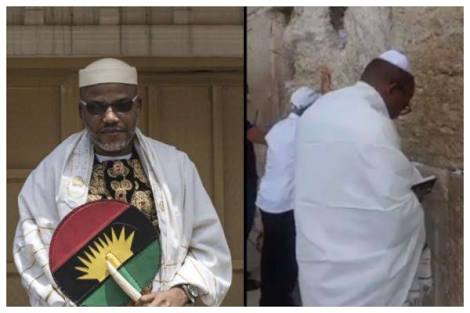 After resurfacing in Israel, there has been controversy on social media.


The Department of State Services (DSS), has denied that five of its
personnel aided Nnamdi Kanu, leader of the Indigenous People of Biafra
(IPOB) to escape from his Umuahia home on Sept. 14, 2017.

But how did he escape from Nigeria without a passport?

NAN
reports that Kanu’s whereabouts was unknown, until he surfaced in
Israel recently, after the alleged Sept. 14 raid by a combined team of
the Army, Police and the DSS at his home in Umuahia, Abia.

A
statement by the Public Relations Officer of the service, Mr Peter
Afunanya, said that the purported report was fake, mischievous and
defamatory.

“The Service wishes to state that the news is fake,
mischievous and defamatory. It is nothing but a figment of the
imagination of the originators,” the statement quoted Afunanya as
saying.

He said that the stock in trade of Kanu and his
collaborators, was to peddle rumours, gossips and propaganda aimed at
subverting the government, its key agencies and officials,

He
said that the service was aware of some unscrupulous elements keen on
exploiting the situation to constitute a nuisance to the freedom of
Nigerians as guaranteed in the Constitution.

Afunanya said that the elements were also keen on disrupting the forthcoming 2019 general elections.

“The DSS will not idly standby and watch these undesirable elements achieve their aims,” he said.

Fayose Shocks EFCC With ‘Stomach Infrastructure’; Buys Food For 150 People In Their Office