2019 Presidency: How Buhari, Atiku Are Battling For Big Votes

by Tony Orji
in News
Reading Time: 7 mins read
A A
0
Share on FacebookShare on TwitterShare on Whatsapp 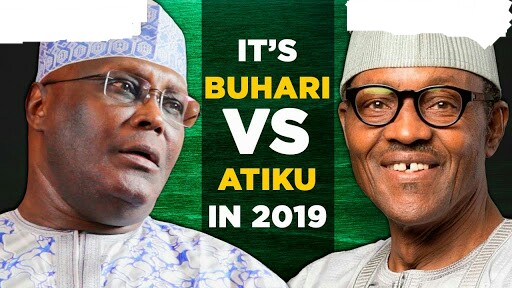 Although over 20 political parties have produced their presidential
candidates in the race to the 2019 general elections, observers believe
the presidential election will be mainly a battle between President
Muhammadu Buhari of the APC and former Vice President Atiku Abubakar of
the PDP.

In the meantime, as the North leads with the number of registered
voters, political analysts say this is where Buhari and Atiku – who are
both Muslims, Fulani and septuagenarians – will have their hottest
battle for votes.

What are their strategies to win the big votes?

The Punch’s Jesusegun Alagbe writes;
When former Vice President Atiku Abubakar defected to the PDP in
December 2017, after a four-year sojourn at the ruling APC there were
insinuations he was not going back to the PDP just to be a member, but
to make another attempt at fulfilling his presidential ambition.

The former Vice President had in previous times sought this position:
first, in 1992 when he contested the presidential primary of the Social
Democratic Party but lost out to late Chief MKO Abiola.

He sought the presidency again in the 2007 general elections on the
platform of the Action Congress, but came third behind the PDP’s
candidate, late Umaru Yar’Adua, who won the election, and the All
Nigeria Peoples Party’s candidate, Muhammadu Buhari, who came second.

In 2011, Atiku contested the PDP presidential primary ticket but lost
out to former President Goodluck Jonathan, who was Yar’Adua’s ex-Vice
President.

Not giving up on his ambition, in 2013, he defected to the newly-formed
APC, but lost in the party’s presidential primary to Buhari, who
eventually won the presidential election in 2015.

Following this defeat and being allegedly shut out of the Buhari
administration, Atiku stayed two more years at the APC before leaving in
December 2017.

Expectedly, he declared another presidential bid on the PDP platform in
July 2018, promising to rebuild the economy and tackle insecurity
effectively, two areas in which he claimed the Buhari administration had
failed the people woefully.

Fortunately for him, the former VP emerged the PDP presidential
candidate last Sunday in what political pundits have described as the
most competitive presidential primary of any party in the race to the
2019 general elections.

“We have a wonderful opportunity to return the PDP to power,” Atiku said
in his acceptance speech at the Adokiye Amesiamaka Stadium, Port
Harcourt, the Rivers State capital.

“We’ve enumerated the challenges faced by the country over and over.
What we need to do is to proffer solutions. That is what will make us
different from the clueless government.”

Speaking of the “clueless government,” the ex-VP apparently referred to
the administration of Buhari, his likely major contender in next year’s
presidential election.

Buhari had also emerged the APC’s 2019 presidential candidate after
polling 14.8 million votes in the party’s direct presidential primary
across the 36 states and the Federal Capital Territory.

Other presidential candidates the Independent National Electoral
Commission has cleared include Donald Duke of the Social Democratic
Party; Olusegun Mimiko of the Zenith Labour Party; Obi Ezekwesili of the
Allied Congress Party of Nigeria; Kingsley Moghalu of the Young
Progressives Party; Fela Durotoye of the Alliance for New Nigeria; and
Omoyele Sowore of the African Action Congress.

However, despite the emergence of new and young candidates, political
analysts postulate that next year’s presidential election will mainly be
between Atiku, 71, and Buhari, 75, of the PDP and the APC respectively.

“We hope to see the emergence of people like Ezekwesili, Moghalu and
Durotoye in the future. They are young and seem innovative, but I
believe the 2019 presidential election will still be between Atiku and
Buhari,” a Lagos-based lawyer and political commentator, Mrs Seyi Lawal,
said.

She explained, “More people, especially the youths, are getting more
politically conscious and are demanding employment, safe business
climate, stable electricity, among others. They are taking a cue from
their counterparts in North America, Europe, Asia and even the Middle
East.

“They are seeing how government is run in places like Dubai, Singapore,
Canada, France, and so on. They won’t tolerate the present crop of
political class who have kept them in perpetual mediocrity for too long
again.

“But for now, from the look of things, the 2019 presidential election
still remains between Atiku and Buhari, that is, between the PDP and the
APC. Moreover, this is also because the 36 states are still largely
controlled by the two main parties.”

An Abuja-based political scientist, Dr Joseph Bello, agreed with Lawal,
saying with Atiku’s emergence as the PDP presidential candidate, Buhari
would strive harder to beat the former VP at the poll, because “more
Nigerians are getting fed up with the APC administration.”

Bello noted that with increasing unemployment, insecurity, unstable
economy, poor business environment, and one-sided anti-corruption war
under the Buhari administration, more Nigerians were already looking up
to another “saviour.”

He opined that it might be an easy victory for the PDP in states in the
South-East, South-South and the Middle Belt, while the PDP and the APC
would slug it out in the North-East and North-West, as well as the
South-West.

Citing reasons for his assertion, the political scientist said, “Let me
start with the South-West. Even though the zone is run by the APC, the
votes are going to be divided between the PDP and APC. Case studies are
the recent Osun State and Ekiti State elections.

“The South-South, with six states, and the South-East, with five states,
have always voted for the PDP at the presidential level since 1999. I
don’t know how that’s going to change in 2019, especially due to several
factors.

“The South-Southern and South-Eastern people won’t quickly forget
Buhari’s 95-5 leadership mindset, wherein the President suggested those
who gave him just five per cent of votes at the 2015 elections shouldn’t
expect more from him, unlike those who gave him 95 per cent of votes.

“These people would also not forget the way the Indigenous People of
Biafra were treated under this administration. Talking about the Middle
Eastern people, the herdsmen killings will be a huge factor in voting
for the next president. I’m not sure they would want to forgive Buhari
over the insecurity situation there.”

He added, “Even though Nasarawa State is led by the APC, the PDP still
won at the presidential level in 2015, so this may still happen in 2019;
same thing in Plateau State. Benue State is now a PDP-controlled state,
and with the herdsmen killings, the APC should be afraid.

“The Senate President will likely pull a stunt in Kwara State, where he
hails from. In other states like Kogi and Niger in the Middle Belt, the
votes might be shared between the PDP and the APC.”

Bello noted the main battleground for Atiku and Buhari would be in the
North-East and North-West, where both hail from respectively.

He further analysed, “Buhari is from Katsina State in the North-West,
where we also have Jigawa, Kaduna, Kano, Kebbi, Sokoto and Zamfara
states.

“This geopolitical zone provided the President with 46 per cent of his
entire 15 million votes in 2015, but with Atiku having the support of
former co-aspirants who are political heavyweights in their respective
states, he will eat into Buhari’s votes significantly.

“Remember we have Tambuwal and Attahiru Bafarawa in Sokoto State;
Kwankwaso in Kano State; Ahmed Makarfi and Datti Ahmed in Kaduna State;
Taminu Turaki in Kebbi State; and Sule Lamido in Jigawa State. Hence,
it’s not going to be an easy ride for Buhari in 2019, unlike in 2015.

“Atiku is from Adamawa State in the North-East, where we also have
Bauchi, Borno, Gombe, Taraba and Yobe states. In this zone too, the PDP
and APC will have a fierce fight. The APC controls four states while the
PDP controls only two in this zone.”

In his piece, 2019: Atiku vs. Buhari, a former Special Adviser on Media
and Publicity to ex-President Jonathan, Mr Reuben Abati, stated that
Atiku, just like Buhari, had a strong political machinery in the North.

He wrote, “Atiku came into the limelight through the late Shehu Yar’Adua
political machinery: the People’s Front of Nigeria, which later became
the People’s Democratic Movement.

“Yar’Adua, who was murdered in prison by the late General Sani Abacha
government, used that platform to build bridges across Nigeria. Former
President Olusegun Obasanjo was Yar’Adua’s friend, (and) they were both
Abacha’s prisoners, and he would later prove his loyalty to the man who
previously served him as Chief of Staff, by anointing his junior
brother, Umaru Yar’Adua as Nigeria’s President in 2007.

“It was Atiku Abubakar, not Umaru Yar’Adua who inherited the Shehu
Yar’Adua political machinery. In fairness to Atiku, he has kept that
machinery alive, oiling it over the years such that there is no part of
Nigeria where you do not have a PFN-PDM cell. Atiku’s emergence has
automatically re-activated those cells.”

He added, “Politically, even members of the ruling All Progressives
Congress see Atiku Abubakar as one of their own. There is no major
player in this country who has not had the opportunity of interacting
with Atiku at one level or the other. To every other constituency, Atiku
is saying Nigeria must be restructured. He poses a real threat to
President Buhari’s second term ambition.

“Senator Kwankwaso, now the main PDP politician in Kano State, will
divide the votes in Kano in Atiku’s favour. The South-East and the
South-South may not vote for Buhari. In the South-West, Asiwaju Bola
Tinubu, the godfather of Lagos State politics, has every reason to give
Buhari ‘an Ambode treatment’.”

An Abuja-based lawyer and political commentator, Mr Aliu Mustapha, also
noted that with the North having the highest number of registered voters
in the country (39,021,964, according to INEC as of January 2018, as
against 34,020,986 in the South), the zone remained the hottest
battleground for both Atiku and Buhari.

He said, “The North has always shown better disposition when it comes to
voting and I don’t expect this to change in 2019. Many southerners
travel abroad or monitor elections on the TV or social media.

“Hence, both Atiku and Buhari will have to battle for these people’s
votes in 2019. A lot of factors will come into play and you can’t
readily tell who is going to win. Both are strong politicians in the
region.”

Shortly after Atiku emerged the PDP presidential candidate on Sunday,
the Convener of the Save Nigeria Group and Senior Pastor of the Latter
Rain Assembly, Tunde Bakare, said the 2019 presidential race would be a
robust fight between two “old eagles.”

The cleric stated this during his Independence Anniversary State of the
Nation address titled, The Road to 2019: Quo Vadis, Nigeria?

According to him, the 2019 presidential contest between Atiku and Buhari
will be an “Eagle versus Eagle” and not “Eaglet versus an Eagle.”

Stating that he wasn’t campaigning for Atiku, Bakare said, “I wish
President Muhammadu Buhari the best in 2019. He has the power of
incumbency and he will do his best to win the election, but Atiku is not
going to take ‘no’ for an answer when the two forces collide in the
election.

“I can’t say Atiku will win or lose. You see, I am not advocating for
him. Among all the aspirants who contested the PDP’s ticket with him, he
is perhaps the most cosmopolitan, he is a Wazobia man.”