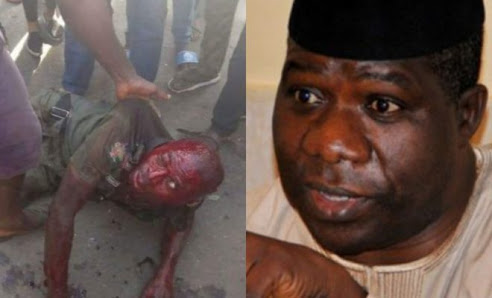 The culprit opened fire at the All Progressives Congress (APC)
secretariat during the welcome rally held for the governorship flag
bearer, Dr. Kayode Fayemi.

Bamidele and five other injured party members were hospitalised. But,
the former federal lawmaker has been relocated to Lagos for post-surgery
treatment.

The officer was battered by angry party members who smashed his head,
inflicted injuries on him and dispossessed him of his service rifle.

Ekiti State Commissioner of Police Mr. Bello Ahmed, disclosed that the
mobile policeman has been dismissed from service to pave the way for his
trial in court as soon as he is discharged from the hospital.

The police boss who spoke on a live programme on Channels Television
said that the politician who brought the policeman to Ekiti State from
his Lagos base has been detained and he is being grilled by
interrogators.

CP Ahmed said the politician will also be arraigned in court as soon as
the Police conclude their investigation into the shooting incident.

He said: “The policeman involved is dismissed already and even though he’s nursing some injury.

“At the appropriate time, he will face the law of course. Nigerians will be briefed on the outcome of our actions.”

The police boss also spoke on the readiness of the command to regulate
the activities of political parties to prevent violence and other acts
that could lead to breakdown of law and order.

Part of the measures, according to him, was the deployment of armed
policemen from neighbouring states which he said would be a continuous
exercise as election approaches.

He added: “We have robust arrangement to regulate and observe these
political activities as they unfold in Ekiti State, in fact in the
entire state.

“We just got a robust deployment of mobile policemen and that will be increased as the campaigns are progressing.

“You know what is on the ground will determine what will be done. If the
situation on ground dictates we behave otherwise, we will do provided
it is within the confines of the law.

“We are going to regulate every inch of activity in the state. We will
not sit down and tolerate any act of lawlessness, whoever is involved.

“The police, we are willing, competent to take action against any group
or persons, either individual or groups as far this campaign is
concerned.”