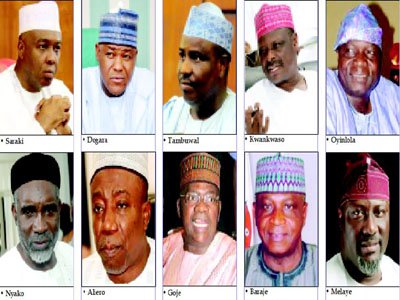 Aggrieved leaders of the nPDP component of the All Progressives Congress
(APC) have compiled a fresh list of complaints which they want the
ruling party to resolve immediately.

The
additional grievances are expected to be tabled at a crucial meeting
between Vice President Yemi Osinbajo and leaders of the nPDP in Abuja
today or tomorrow.

Top of the new list of complaints are grudges
about the conduct of the recent state congresses of the party and
alleged refusal of the party leadership to stamp its feet on parallel
congresses in some states, The Nation gathered.

The original complaint is alleged marginalization of nPDP members in the sharing of positions and patronage.

The
nPDP had, in a letter, given the APC leadership a one week ultimatum to
address the issue failing which they threatened to dump the ruling
party.

The upcoming meeting with the VP is the latest of the efforts to resolve the crisis in the ruling APC.

It
is coming ahead of a two/three week timeline agreed by both parties
during previous discussions to address the nPDP grievances.

A source called it an “upscale follow up to the earlier meeting with the APC leadership.”

Shedding light on the agenda of the planned meeting, the source said: “our grievances have increased to include the following:

A strong member of
nPDP Senator Aliyu Wammako is not likely to attend as he is currently
in Saudi Arabia for the lesser Hajj, Umrah.

“After the engagement
with the APC leadership, we were told that there will be a meeting
either on Sunday or Monday with the Vice President,” the source said.

He
added: “this is a high-level session which will involve the key actors
in nPDP like Saraki, Dogara, Tambuwal, Kwankwaso,Wammako, Nyako,
Senators and members of the House of Representatives.

“I think
ex-Vice President Atiku Abubakar might not be involved because he seems
to have made up his mind to foreclose any talks with the presidency and
the APC leadership.

“This is a continuation of the ongoing engagement between the APC leadership and nPDP leaders on the way forward.”

The source explained that the two sides agreed on a timeline of two to three weeks to resolve all issues raised by nPDP.

“The APC wanted a three-week timeframe,” the source said.

“At
the last meeting of nPDP, there was a suggestion that Baraje should
report back to nPDP in one week but leaders later agreed on a two-week
timeline.”

The source also clarified that the May 23, 2018
session was not attended by only nPDP members but by also aggrieved
party leaders, Senators and Representatives from the defunct Action
Congress of Nigeria (ACN).

The meeting was specifically attended
by those who have concerns about state congresses. Some of us, who are
not members of nPDP Caucus, went to the meeting because we were
dissatisfied with the outcome of the congresses in our states.

“Some
of us had peculiarities in our states which the APC leadership has not
addressed. It was a cocktail of lamentations over the conduct of the
congresses.”

The concerns were over the credibility of the exercise.

“We
agreed that we need to interact with the party to see whether or not it
can ameliorate the situation before the next steps by the disappointed
stakeholders.

“But at the session, Baraje was asked to brief the
gathering. He told us how they went to APC and were attended to by the
Deputy National Chairman (North), Senator Lawal Shuaibu and the National
Secretary of the party, Mallam Mai Mala Buni.

“He told us that
the engagement process was still ongoing. It was then members were
trying to prevail on Baraje to report back in one week and decide on the
next line of action. But the majority opted for a two-week grace.”

Baraje,
in a statement, only confirmed that he had briefed nPDP leaders at a
session on May 23 on the interaction with APC leadership.