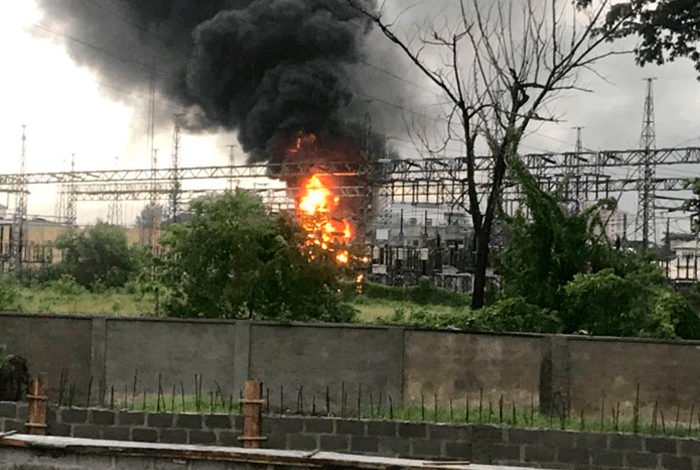 The fire damaged a 66MVA transformer and plunged parts of Ikoyi and Lagos Island into darkness.

It was learnt that the incident occurred around 5am, during heavy rainfall.

The fire was put out by fire fighters.

It
was gathered that there was a loud bang, following which the
transformer caught fire and the electricity in Beckley, parts of Ikoyi,
Keffi and central Lagos went out.

Nwokoye said: “This
morning, there was rainfall with a lot of lightning and one of our
transformers at Alagbon substation caught fire. The 66MVA transformer
caught fire as a result of the light arrester that was shattered due to
the thundering light.

According to The Nation, General Manager in
charge of Transmission, Godfery Nwasoke, the fire outbreak would not
cause blackout in areas such as Osborne road, Ikoyi, Victoria island and
its environs, contrary to speculations among people.

He said the
TCN has 50 per cent of its capacity in the affected area, and that the
issue only affected a smaller portion of the area.

He said the
transformer that was affected was serving one of the feeders, which is
serving about i5 megawatts of electricity (Mw).

He said TCN has
transferred the load from the affected transformer to another
transformer in the area, in order to prevent it from having a major
impact on the residents of the area.