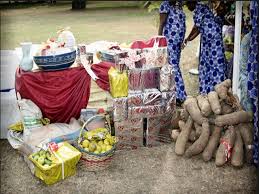 The police in Suleja, Niger State, have confirmed the arrest of the
parents and relation of a bride, who disappeared after her wedding,
refusing to go to her husband’s home.

The arrest of the trio
followed a complaint to the police by their son in-law, Shuaib Dauda,
for the sudden disappearance of their daughter few hours after wedding.

Mr Dauda earns a living as an auto mechanic.

Aliyu Lawal, officer-in-charge of Kaduna-Road police outpost in Suleja, gave the confirmation to the NAN on Sunday.

Mr
Lawal, a police inspector, said the incident occurred on May 6 when the
bridegroom complained to the police that the people he sent to the
bride’s home to fetch her, in accordance with the tradition, did not see
her.

Mr Lawal said the footdragging by the brides’ family to
deliver the bride to the bridegroom led to the disruption of peace in
the area, hence the arrest of the parents and the marriage guardian.

“They were arrested on Sunday, May 6, and granted bail on Monday May 7,” he said.

But
Abubakar Haruna, popularly known as Zakiru and a resident of Hayi along
Kaduna Road, told NAN that he gave out two daughters same day, Fiddausi
to Mr Dauda and Saliha to one Muhammadu Murtala.

He said before
the marriage, Mr Dauda and Mr Murtala promised to comply with all the
religious and traditional obligations for the marriage such as the dowry
and buying of clothes and boxes for the brides.

“After the wedding ceremony, Dauda said he could not afford to buy the clothes and boxes to the bride as promised earlier.

“Fiddausi,
realising that Murtala (the husband to Saliha) had redeemed his promise
and presented the traditional gifts and Dauda did not, ran away to the
neighbouring house until her bridegroom fulfilled his own promise,’’ he
said.

Mr Haruna said already beddings, traditional kitchen wares,
furniture and other domestic utensils had been taken to Dauda’s home,
ahead of the conveyance of Fiddausi to her new home.

He explained
that while they were searching for Fiddausi, the team sent by the
bridegroom to fetch Fiddausi to the matrimonial home hinted Mr Dauda of
the sudden disappearance of the bride.

He claimed Mr Dauda
mobilised his friends who stormed his compound, insisting that Fiddausi
must be produced. In the process they molested him and brutalised his
wife, named Bayi.

“Some other female guests from Kano were also
brutalised, food items and other valuables they brought for the wedding
ceremony were stolen by the hoodlums who attacked us for our alleged
failure to produce the bride,’’ Mr Haruna said.

Mr Haruna said
while the hoodlums were molesting his family and his guests, the police
officers from Kaduna Road outpost arrested him, his wife and his younger
brother who is also the marriage guardian. The latter was identified as
Umar Musa.

Mr Haruna dismissed the allegation by the police that
he was arrested for disrupting public peace in the community. Rather,
he explained that the police asked him to refund N260,000 to Dauda,
being the amount he spent on the marriage.

Mr Haruna said when he
failed to pay the money as demanded, he was detained together with his
wife and his younger brother by the police.

According to him,
they were detained overnight at the police outpost and were granted bail
following the intervention of his lawyer, Aliyu Musa.

He said the bail was obtained on the condition that they would bring the money the following day or risk prosecution.

Meanwhile, Fiddausi has returned to her father’s house.

PDP To Work With Aggrieved NewPDP Members In APC