Why Should We Disclose Our Earnings? – House Of Reps Refuse To Open Up On Salaries 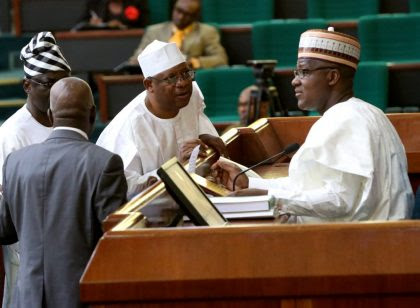 Lawmakers of the House of Representative at the National Assembly,
Abuja, have declined requests to disclose their salaries and running
cost.

While speaking with The Cable, spokesman of the house, Abdulrazak
Namdas, on behalf of his fellow lawmakers declined requests to disclose
their salaries and running cost, and expressed fury when contacted over
the issue.

Recall that recently, the senator
representing Kaduna central, Shehu Sani, disclosed that apart from the
basic monthly salary of N750,000, each senator gets N13.5 million as
“running cost”.

In a swift reaction when asked to confirm the
claim, Namdas said; “Democracy is not only about lawmakers…why should I
disclose what I earn as a lawmaker.

“I’m not talking about the
running cost of lawmakers. I can’t talk on that for lawmakers in the
house of representatives because we have done that before. Why should I
disclose it? If you think it is a public information, then go to the
Revenue Mobilization Allocation and Fiscal Commission (RMAFC).

“Do
you know the salary of a minister? Is he not a public official? Why are
you bothering on our own? Democracy is not about only legislators.

“I
cannot say this is what I earn because you don’t know the salary of a
minister, and they are public officials too. But if a member of the
house of representatives says he earns this amount, then I can clarify.”

When
told that the public is interested in knowing the earning of the
lawmakers, he said: “If people are asking questions, let them be asking.
It is natural for them to ask questions.

Jerry
Alagboso, a Peoples Democratic Party (PDP) lawmaker from Imo state,
feigned ignorance of his earnings, and when asked to give details of the
earnings of lawmakers in the lower legislative chamber, he said: “I
don’t know anything about that (the earnings).”

When probed
further, the lawmaker fired back in anger: “Why do you have to ask me
about that? Go and meet the clerk of the national assembly.”

An
All Progressives Congress (APC) lawmaker from Adamawa, Abubakar Garba,
in a response to an enquiry of their salaries, said; “I am not supposed
to talk about that.”

Osinbajo holds private engagement for his daughter in Aso Rock