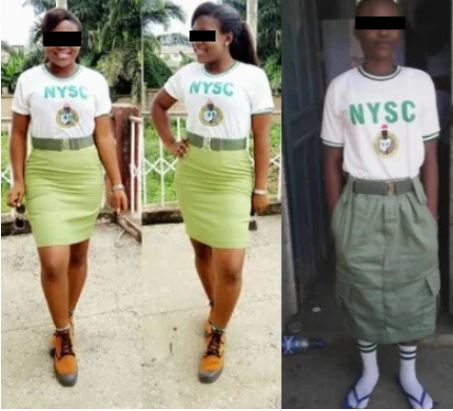 A bill that would have allowed female members of the National Youth
Service Corps (NYSC) to wear skirt has been rejected by the Senate.


This followed the presentation of the lead debate
on the general principles of the bill which was sponsored by Sen.
Emmanuel Bwacha (PDP-Taraba) during plenary.

According to him, the bill is intended to amend Sections 13 and 16 of the Principal Act.

He
said the bill sought to ensure that regulations made by the NYSC
Directorate prescribing uniforms and exercise regimen did not violate
the religious practices and beliefs of corps members.

He said
the objective of the bill was to also increase the penalty for the
offences contained in the Act, to make such fines reflect the present
value of the naira.

Bwacha, who is Deputy Minority Leader, noted
that the NYSC was a laudable scheme established in 1973 by the then
military Head of State, Gen. Yakubu Gowon.

“It was part of the
effort by the Federal Government to rebuild, reconstruct and reconcile
Nigerians following the unfortunate incidents of the civil war which
ended in 1970.

“It is important to point out that while the
scheme has lived up to expectation as a reliable platform for nurturing
young patriotic Nigerians, fostering unity and promoting a better
understanding of our religious and cultural differences, it has,
however, become necessary to amend the Principal Act.

“This is
with a view to address observed lapses and shortcomings. One of such
lapses is that the penalty for offences contained in the Act is now
outdated and in need of urgent review.

“Uniforms and drills adopted by the Directorate have
become a basis for tension and controversy between the Directorate and
corps members and other members of the public.

“The major bone of
contention is that some of the uniforms and drills contravene religious
beliefs and practices of corps members and invariably their right to
freedom of religion, thought and conscience under the Nigerian
Constitution.

“This bill essentially addresses the above mentioned lapses in the Principal Act,” he said.

Contributing, Sen. Suleiman Adokwe (PDP-Nasarawa), said “the amendment being suggested is not even worth the trouble.

“This is because the powers to prescribe uniform is what the NYSC Act is to the Directorate.

“I
believe if the directorate wants to change the uniform at any time, it
is a matter of deciding because it only has power to prescribe the type
of uniform.

“The type of uniform is even not prescribed; so I
don’t know why we should trouble ourselves; all you need to do is to put
pressure on the directorate to change the uniform but not necessarily
to change the law.

“All the religious organisations that are
feeling oppressed by it should put pressure and lobby the directorate to
change its dress code,” Adokwe said.

Also, Sen. Jeremiah Husseini (PDP-Plateau) “there is no need for this bill”.

In
his remarks, the Deputy President of the Senate, Mr Ike Ekweremadu who
presided over the proceedings, said: “I am not trying to stop the bill;
even if you pass the bill, you must send it to all the states in
accordance with section 9(2).”

After a voice vote by Ekweremadu, the bill was rejected by the lawmakers.

Photo of One Legged Man Plastering A High Wall