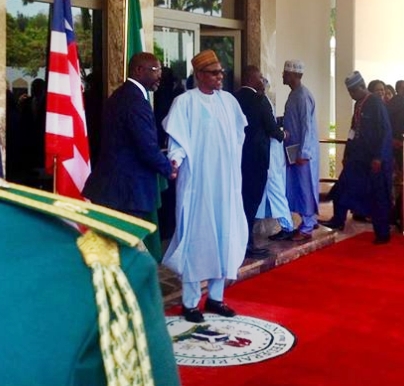 President Muhammadu Buhari on Monday met behind closed door with the
Liberian President, George Weah, at the presidential villa, Abuja.

While
speaking with state house correpondents, the Liberian President, on
Monday, advised the Super Eagles to prepare early to enable them to make
impact in the Russia 2018 World Cup.

The former professional
footballer and world best player, also urged Nigerian sports authorities
to provide conducive environment for the players in the camp, and
warned against a situation where players would be deprived of their
allowances, saying such situation makes players to lose focus.

He
said, “I think Nigerian team is a model, we all follow them. I have
played with great Nigerian players, I played against them. Now you have a
new generation, the fact that they qualified is a good thing for
Nigeria.

“But I hope they will prepare very early, because they
are going to represent Africa and we will be there to watch them, for
them to bring the trophy for the first time if it is possible.

“I want every African government to know that if you win World Cup, it is a pride to Africa and not just to Nigeria.

“So,
we must do everything to ensure that the players are not stressed, make
sure they concentrate, make sure their incentives are given to them to
motivate them.

“Some of the things you see at the World Cup, you
will see an entire team go to represent a whole country and you will
hear that one minister took the money, they did not pay these players
and the players are causing problem.

“When players are going to
camp, it is to relax and focus. And for them to be in camp, they must
have everything there for them not to worry.”

Weah recalled that
he played in European setting where they did not have to worry about
anything when they were in camp, adding the only things they were doing
in camp then were to shower and prepare for the games, saying there was
no excuse not to perform because everything that players needed was
provided.

“So, let the players not have excuse; support them and
let them go and bring back that cup,” he told Nigerian sports
authorities.

Do You Want To Be Better? How To Adjust Your Attitude QUICKLY