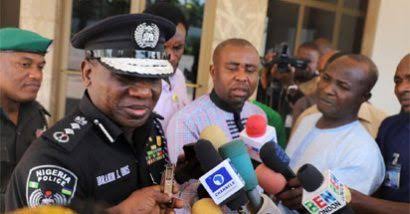 The Inspector-General of Police, Ibrahim Idris, while citing the
security challenges facing the nation, on Monday ordered the withdrawal
of all police offices attached to Very Important Persons, including
political and public office holders nationwide.

The police boss,
who announced this in Abuja during a conference with senior officers,
stated that the directive also affected private businessmen,
multi-national companies and other corporate organizations who are
enjoying special police protection.

To this
end, IGP Idris explained that a task force had been constituted at the
Force headquarters under the command of ACP Mohammed Dankwara to ensure
compliance to the directive while state commissioners of police are to
replicate same at their commands.

Announcing his plans to
withdraw the policemen on private guard duty, the IG said, “In view of
the current security challenges in the country, it has become expedient
for the Nigeria Police Force to streamline the deployment of its
personnel attached to political and public office holders, aimed at
enhancing effective and efficient policing of the country.

Idris, however, explained that businessmen,
corporate organisations and individuals who required special police
protection and “are found worthy,” would be considered by the Special
Protection Unit of the force on application for re-validation through
the state Commissioners of Police where they are resident.

“By
so doing, I am charging the Commissioners of Police with the
responsibility of supervising such official deployment and thereby
holding them accountable,” the police chief informed his audience
consisting of senior police officers.

The Punch reports that the
IG bemoaned the abuse of police Supernumerary number plates and the
illegal use of siren and covering of vehicle number plates by motorists
and warned the culprits to desist.

He directed the holders of
the police SPY number plates to return them to the Force Transport
Officer and apply for re-validation.

He also asked the state CPs
to enforce the directive and arrest violators, adding that the list of
task force teams that would ensure compliance to the order should be
sent to the Deputy Inspector-General of Police, Operations, by March 31,
2018.

From Hotel Waiter To A Governor’s Special Assistant