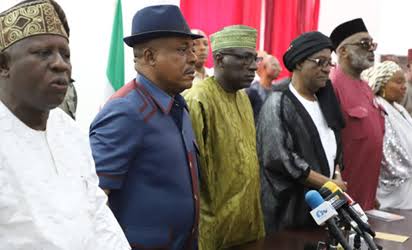 *Why Jerry Gana, Adeniran others were aggrieved
The Peoples
Democratic Party (PDP) has emerged as the arrowhead of a plot to
coalesce all opposition parties and groups for the purpose of dislodging
the All Progressives Congress (APC) from power in next year’s
elections.

The party is already reaching out to such opposition parties and groups, The Nation gathered authoritatively yesterday.

Many power brokers across the land are said to be in support of the move.

“There
is not going to be a divided opposition against APC. All opposition
parties will coalesce to fight APC in 2019,” a highly placed source
familiar with the plan said last night.

“We have discovered that
unless we sink our differences and slug it out with APC, which is a
common enemy, we cannot unseat the ruling party or defeat President
Muhammadu Buhari in 2019,” the source said.

The PDP, he added, will not underrate the battle ahead, hence its determination “to reclaim power at the first ballot.”

Continuing,
he said: “There are many talks/ discussions at various levels on the
way forward for Nigeria in 2019, especially how to defeat APC.

“Some of these talks are at the level that people do not think about.”

Reminded
about the exit of some PDP leaders to the Social Democratic Party
(SDP), the source claimed that the SDP “cannot stand alone.”

He was confident that the PDP and SDP would “work together at the end of the day. So, we will all end up under the same roof.

“By the time we come out stronger, the battle would have been half won by the opposition.”

A top
source in PDP said: “We were aware that they were just aggrieved because
their candidate did not win the chairmanship election at the National
Convention of our party.

“They had been in control of the PDP and used to determine its affairs for a long time.

“They used to be in charge and they could not imagine themselves not calling the shots anymore.

“We
are not bothered because some of those who defected from PDP to SDP
have not even won councillorship seat or any election since 1999.

“They
have been living on PDP like parasites. They have benefited from the
party and they have dumped the party that has shot up their profile.”

Tips To Eat Your Way To A Smooth Skin

Things You Should Never Do When You Return from Holiday Break