“Time Has Come To Restructure Nigeria” 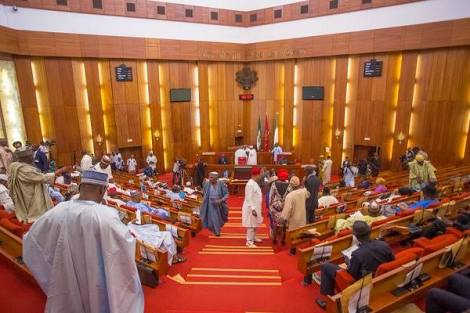 Former Chief of Defence Staff, Gen. Alani Akinrinade (retd) and other
prominent stakeholders on Monday told President Muhammadu Buhari to
brace up for restructuring, insisting that it was time to unbundle
Nigeria and make it beneficial for everyone.


Akinrinade, who delivered a lecture in Yenagoa,
Bayelsa State, to mark the sixth anniversary of Governor Seriake
Dickson’s administration, specifically urged Buhari to initiate a bill
in the National Assembly for power devolution.

“President Buhari
should go immediately for the clusters of consensus and low hanging
fruits by initiating a bill for the structural unbundling of an
overburdened centre through the removal of several agreed items from the
current Exclusive List and their devolution to the constituting states
in a way and manner that does not enfeeble or endanger the manifest
destiny of the nation,’ he said.

Several people trooped to the
Banquet Hall venue of the lectire to listen to the retired general, who
revealed the historical origin of restructuring with a conclusion that
the survival of the country depends on it.

Dickson led his Deputy, John Jonah (retd) and members of
his cabinet to the lecture while the Speaker of the state House of
Assembly, Mr. Kombowei Benson, was accompanied by other lawmakers.

Akinrinade,
whose lecture was punctuated intermittently by applauses, maintained
that restructuring was inevitable and unavoidable for Nigeria but said
it was not yet a done deal.

Listing the expectations of a restructured country, he said:

“I hope to live to see the day in a properly federalized and
restructured Nigeria, the return of the groundnut and cotton pyramids to
Kano wrapped with colourful hides and skin, huge cocoa plantations to
the west, the palm oil and kernel industry to the East and the
appearance of yam skyscrapers in Makurdi, Gboko and Jalingo

“Governor
Seriake Dickson sir, I hope in my lifetime, that you or one of your
successors will transform from an administrator to a true governor that
will not need to look elsewhere to adequately protect and safeguard his
people and their properties.

“That will be free to plan and
execute without hindrance the utilization of her natural resources
including oil and gas to the benefit of Bayesians first, and observing
and enforcing best practices for environmental protection.

“That
can fully embrace self- reliance without the encumbrances of some
dubious, resource wasting institutions like NNDC, Ministry of Niger
Delta etc. housing at great expense, jobbers in Agbada and Babanriga,
masquerading as board members, ministers etc. but cannot differentiate
between the abode of oysters crayfish and periwinkle, nor the difference
between a luxury cruise ship, which they know well at your expense and a
canoe.”

Tips on How To Be Confident In God & Get Results

How To Overcome Struggles In Life and Become Successful