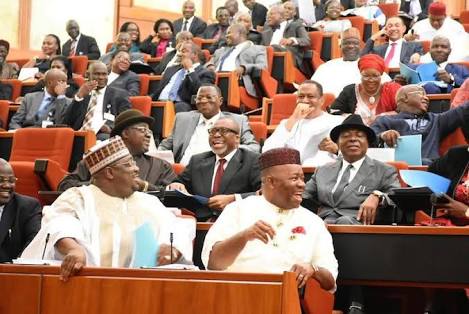 In what appeared an about turn, Senator Ovie Omo-Agege, yesterday
tendered an unreserved apology to the Senate for alleged “offensive”
comments against the upper chamber.

Senator Omo-Agege in a
subdued voice owned up that he over shot his bounds by claiming at a
media briefing that the amended Electoral Act which reordered election
sequence in the country was targeted at President Muhammadu Buhari.

The
Senate on Tuesday referred the matter to its committee on Ethics,
Privileges and Public Petitions for investigation following the adoption
of a motion by Senator Dino Melaye on the matter.

Melaye prayed
the Senate to refer the matter to the committee for investigation
claiming that Omo-Agege’s comments impinged onthe integrity of the
Senate.

The Kogi West senator also said that Omo-Agege misled and
incited Nigerians against the Senate by making unsubstantiated comments
on reordered of election sequence.

Omo-Agege said,” Yesterday
(Tuesday), I was not here (Senate chamber). My colleague and my brother,
Senator Dino Melaye brought a motion under Privileges which is in
Order14 & 15 of the Senate Standing Rules.

“Mr. President, I
rose as a consequent on the debate on the sequence of elections in the
Electoral Act amendment which was passed last week Wednesday.

“In the course of that debate and subsequent upon that, I addressed the media at he Press Centre.

“I
made certain remarks during that interview which my attention has been
drawn to. The comments are offensive, not just to Senator Dino Melaye,
but to the entire Senate.

“I rise to apologise to the leadership
and the entire Senate for those remarks. I take back whatever I said.
Thank you Mr. President.”

Deputy Senate President, Senator Ike
Ekweremadu who presided over the plenary commended Omo-Agege for being
courageous to apologise for what he said.

“The matter has
already been referred to the committee on Ethics, Privileges and Public
Petitions. I urge the committee to quickly look into it so that we can
have the report as quickly as possible. Then we will take a decision. Is
that the wish of the Senate?”

The Senators yelled “yes” as Ekweremadu promptly hit the gavel.

An
insider said that Omo-Agege acted promptly to apologise “because he
risked indefinite suspension after appearing at the Ethics committee.”

According
to the insider, “Omo-Agege knew that he has shot himself on the foot.
He knew that his case is a done deal. Whether his apology will be enough
to mitigate his punishment for willfully impinging on the integrity of
the Senate is what I cannot tell you at this point in time. You just
wait and see.”

Chairman, Senate Committee on Media and Public
Affairs, Senator Aliyu Sabi Abdullahi told reporters that immunity on
the floor of the Senate does not cover lies.

Abdullahi said that
senators who addressed reporters after the adoption of the conference
report on reordering of election sequence peddled falsehood.

He
noted that the Senate did not believe in witch hunting any body “but
today one of our colleagues rising under Order 43 owned up that his
misfired.”

Abdullahi added,”If anybody feels strongly about any
issue, there are procedures and processes to go about it but let your
personal interest not hinder or impinge on the collective interest of
the Senate.”

How My Friend Tried To Destroy My Matrimonial Home – Woman Reveals