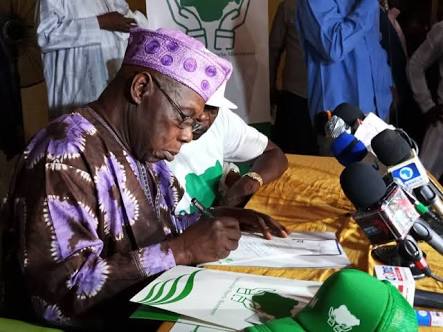 Former President Olusegun Obasanjo reaffirmed his anti-President
Muhammadu Buhari battle yesterday in Lagos when he said only a popular
movement can enthrone a progressive leadership required to make Nigeria a
great country.

He said Nigeria had disappointed Africa in providing needed leadership in post-military era.

Although,
the ex-president did not specifically mention any regime, he said the
nation deserved a better leadership to enable it play a front role in
Africa’s socio-economic growth. He said the way out of the development
quagmire is for the masses to form non-partisan “popular movement” that
would serve as a credible alternative.

The former president spoke
yesterday at the 15th Lecture and International Leadership Symposium
with the theme: Leadership and Performance in Africa: The Challenge of
the Continent’s Economic Competitiveness, organised by Centre for Value
Leadership (CVL) at Muson Centre, Onikan, Lagos.

CVL is a leadership think-tank founded by Prof. Pat Utomi.

Obasanjo
said: “The first generation of leaders in this country, whatever you
say about them, gave us independence. They helped in the transition from
colonial power to indigenous leadership. Within their knowledge, their
experience and exposure, these first generation of leaders did their
best. But then, they made mistake, which led to the transition to the
military era. Later, there was another transition to democracy.

The
ex-president also said security matter should not be politicised or
treated as emotional issue, noting that insecurity does not recognise
anyone’s emotion or cultural beliefs. Obasanjo said he disagreed with a
statement credited to former United States (U.S.) President Barack
Obama, who said Africa needed to build strong institutions and not
strong men.

In a special statement last month, Obasanjo discredited
the two main political parties – the All Progressives Congress (APC) and
the Peoples Democratic Party (PDP). He went ahead to form the Coalition
for Nigeria Movement

See Four of The Easiest Foods to Cook

How To Overcome Evil As A Child of God