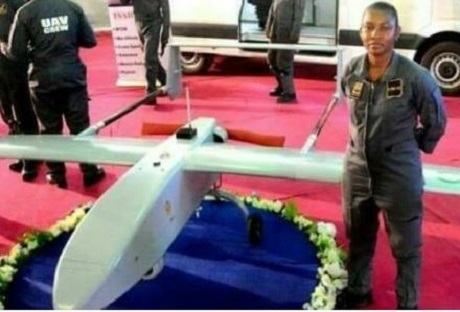 The beautiful woman has a PhD in Control Engineering from the University of Leicester.

As part of the Federal Government efforts to
tackle insecurity in the country, President Muhammadu Buhari has
unveiled a surveillance Unmanned Aerial Vehicle (UAV) produced locally
by the Nigerian Air Force Institute of Technology.

The UAV
codenamed TSAIGUMI is the first Unmanned Aerial Vehicle to be produced
in the country and will be used to fight terrorism, armed banditry and
other sophisticated crimes through enhanced air surveillance.
It
could also be used for policing operations, disaster management, convoy
protection, maritime patrol, pipeline and power line monitoring as well
as mapping and border patrol duties.

In addition, it could be deployed for the protection of wildlife,
weather forecast and telecast. Additionally, in the maritime domain, the
Tsaigumi UAV could be used for search and rescue, coastal monitoring
and patrol of Nigeria’s Exclusive Economic Zone.

The UAV, which
is capable of day and night operations, has an operational endurance in
excess of 10 hours, a service ceiling of 15,000 feet and a mission
radius of 100km. 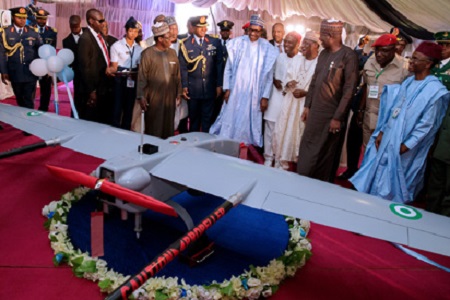 It has a maximum take-off weight of 95kg and its payload is an electro-optic/infra-red camera system.
Tags: ICT Updates
ShareTweetSendShareSend
Previous Post

The playboy who got away with $242m – using ‘black magic’

How To Find True Joy In A Lonely World