Dino Melaye Is Saraki’s Son: How Tinubu Made Senate Erupt In Laughter 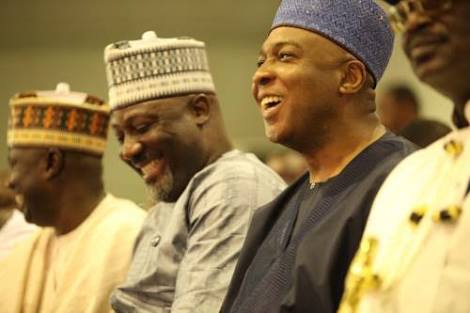 Influential politician and senator representing Lagos central, Remi
Tinubu, has described her colleague from Kogi west, Dino Melaye, as a
son in whom Senate President, Bukola Saraki is well pleased.

The
wife of the national leader of the ruling All Progressive Congress,
made the comment on Wednesday when she was called by Saraki to second a
motion approving votes and proceedings moved by Melaye.

According
to The Cable, Saraki had asked Melaye to move a motion for the adoption
of the votes and proceedings of the last legislative day.

Responding, Melaye said: “I want to move the motion on behalf of myself and Senator Remi Tinubu.”

This
was after Saraki described Melaye who was wearing a red suit as the
best dressed. But Tinubu said she ought to have been called to move the
motion because she is a ranking senator.

The former Lagos State first lady said the day was for roses and Melaye did not have a single one on his attire, while she had.

“I
am a ranking senator. I was supposed to be called to approve the votes
and proceedings but you gave it to him because he is your son,” she
said.

“You are being partial… you also gave him the best
dressed. Did you look at me? I have roses all over. Today is for roses,
he doesn’t even have a single rose.

“Since I am not your
son, I will gladly second the motion, ably moved by your beloved son in
whom you are well pleased. I so second.”

The chamber erupted in laughter.