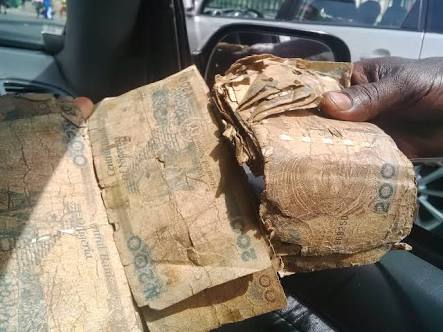 Commercial banks in the country have been accused of deliberately
flooding the market with dirty Naira notes, which have become an eyesore
to citizens.

This is mainly seen in the N100 notes.

At
several Automated Teller Machines (ATM) spread across the country,
customers are given mutilated notes, a thing that has become a source of
worry to many.

Acting Director of Corporate Communications at
the Central Bank of Nigeria (CBN), Mr Isaac Okoroafor, while commenting
on the issue, also accused the banks of hoarding new notes.

He said commercial banks in the country receive enough new notes and wondered why they are not being circulated.

The
CBN spokesman absolved the apex bank from the debacle, pushing it to
the commercial banks. He said the banks were supposed to employ people
to do the sorting for them, but they refused in order to avoid the cost
of employing personnel for this.

“Instead of bringing them to us
sorted, the banks bring them unsorted. Then we started charging them
N12,000 per box. A box of N1000 notes contains N10 million worth. So, a
box of N500 notes is N5 million in that order. So, in a bid to avoid
cost, they preferred to re-circulate old and mutilated notes.”