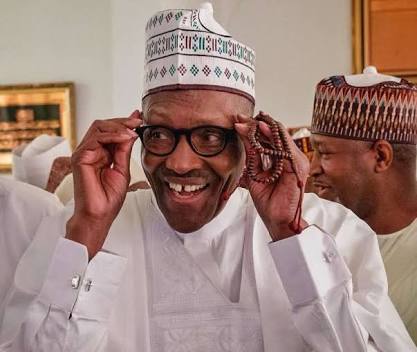 President Muhammadu Buhari on Monday stirred up a fresh controversy over
his real age when he said he thought he was 74 but was told he was 75.

Buhari spoke when the Minister of the Federal
Capital Territory, Muhammed Bello, led a delegation to pay him Christmas
homage at the Presidential Villa, Abuja.

The President, joined
by state governors and other top government officials, celebrated his
75th birthday penultimate Sunday. He was said to have been born on
December 17, 1942, in Daura, present day Katsina State.

While
thanking his guests for the visit, Buhari recalled the health challenge
that kept him away from the country for months earlier in the year and
admitted that 2017 had been a tumultuous year for him.

The
President said he had recovered well from the sickness because he obeyed
his doctors who instructed him to be eating and sleeping well.

He said, “I am very grateful (to you) for taking time out on a very important day to come out and spend it with us.

“I have never been so sick, not even during the 30-month civil war that I was stumbling under farm of yams or cassava.

“But this sickness…I don’t know, but I came out better. All those who saw me before said I look much better when I came back.

“But
I have explained it to the public that as a General, I used to give
orders. But now, I take orders. The doctors told me to feed my stomach
and sleep for longer hours. That is why I am looking much better.”

CROSS OVER TO TAKE OVER!!!