by Tony Orji
in Entertainment
Reading Time: 6min read
0
Share on FacebookShare on TwitterShare on Whatsapp 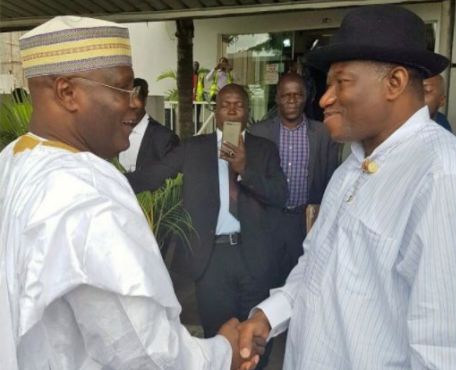 Former vice president Atiku Abubakar has one hurdle to cross in his
secret deal with some stalwarts of the PDP led by ex-President Goodluck
Jonathan, The nation can authoritatively report.

It was learnt that Jonathan has said Atiku must beg or apologize to
ex-President Olusegun Obasanjo to get the 2019 presidential ticket of
the PDP on a platter of gold.

Although Obasanjo has quit partisan politics, Jonathan believes “he is
still a strong factor in shaping the future of the nation in 2019
because he is a force among the revered kingmakers.

Former President Jonathan had in early November told the publisher of
Ovation magazine in an interview that “If Atiku gets our party ticket,
he would compete well. But he would have to reach out to our boss, Baba
OBJ, the boss of all bosses. We’ve all learnt at different times that
you ignore OBJ at your peril. OBJ has the magic wand. He is respected at
home and abroad.”

It was however unclear if Atiku has either accepted the condition or
opted to go it alone in seeking the presidential mandate of the PDP.

But some presidential aspirants in PDP were said not to be ready to step
down for Atiku, whom Jonathan is working to the answer for.

The aspirants said they prefer to slug it out with Atiku during the presidential primaries.

The affected aspirants are ex-Governor Sule Lamido, ex-Minister Ibrahim
Shekarau, Governor Ibrahim Dankwambo and a former governor (now a
Senator), who is expected to defect from APC to PDP.

The fate of the Chairman of the Caretaker Committee of PDP, Sen. Ahmed
Makarfi on the party’s 2019 ticket was hanging in the balance as at
press time.

Findings by The Nation revealed that the deal, which made Atiku resign
from APC was comprehensive and targeted at the ex-VP securing the PDP
presidential slot.

It was gathered that the package also borders on hijacking the party
structure at the National Convention on December 9 to make Atiku’s
choice as the PDP presidential candidate a reality.

Following lobbying by Jonathan, some founding fathers of PDP (including a
few retired military officers), have been part of the latest course in
PDP.

Investigation revealed that most governors of the PDP were said to have bought into the Atiku project in deference to Jonathan.

A top source, who was privy to the deal, said: “The unfolding script on
Atiku’s return to PDP has the blessing of some founding fathers of PDP
who are out to salvage the party. A major component is a likely waiver
for the ex-VP to contest the party’s presidential primaries.

“So far, Atiku is complying with the secret accord for his return to
PDP. A formal declaration in Yola is being expected either on Wednesday
or December 6 as indicated in a tentative timetable.

“But in one of the negotiation shuttles with Atiku, ex-President
Jonathan added a caveat that the former Vice President can comfortably
secure PDP ticket and win the 2019 poll if he begs ex-President
Obasanjo.

“We were all shocked by this condition because Obasanjo is no longer in
partisan politics. But Jonathan said Obasanjo is an institution whose
action or inaction could make or mar the electoral fortunes of Atiku.

“The former President also believes that Obasanjo may persuade any of
the presidential aspirants to withdraw for Atiku after weighing all the
indices. He said if Obasanjo could reconcile with him, he can also
forgive Atiku.

“As a matter of fact, Jonathan cited cases of chairmanship aspirants in PDP travelling to Abeokuta to seek his blessing.

“We are expecting Atiku to comply with this proviso because we want to
begin the media war (based on facts and figures) in earnest.

“Jonathan’s position on Obasanjo has been endorsed by some founding
fathers of PDP, especially the military class which contrived the
existence of the party.”

Meanwhile, there were indications yesterday that some presidential aspirants in the PDP may not step down for Atiku.

These include Lamido, Shekarau, Dankwambo and a former governor (now a Senator), who is expected to defect from APC to PDP.

It was not clear if the Chairman of the Caretaker Committee of PDP, Sen. Ahmed Makarfi will seek the party’s 2019 ticket.

A governor, who played a significant role in the pact with Atiku, said:
“As part of the deal, we have been trying to prevail on some of these
aspirants to step down but they have chosen to contest the primaries
with the ex-Vice President.

“Some of them queried why a politician will cross from the opposition party and just be given PDP presidential ticket.

“One of the aspirants said since 1999, he has never defected to any
party. He said loyalty to the party and competence should be compensated
by PDP.

“Well, we have looked into PDP Constitution, it is immaterial when you
join, you can enjoy the rights and privileges which a Methuselah member
enjoys. Go and look at sections 8 and 18 of our constitution.”

While Section 8(a) and (b) of the PDP Constitution deals with the
procedure for rejoining PDP, Section 18 is on the Status of Returnee
Members.

Section 8 reads: “A person who desires to rejoin the party after leaving
it shall: (a) apply to his Ward Secretary for readmission; and (b)
unless given waiver by the National Working Committee(NWC), be placed on
probation for a period of not less than one year.

“Subject to the provision of Section 8(b), a member on probation shall
have the right to attend all meetings of the party but shall not be
entitled to vote at such meetings, nor shall he be eligible to contest
for elective office on the platform of the party.

Section 18 says: “A person who has earlier decamped from the party but
later decides to return to the party shall lose the seniority and
privileges conferred on him by his previous status.”

But the PDP top shot said: “As the opposition party, we are looking at
the larger picture of the return of Atiku, we will give him all waivers
required to ensure his readmission.

“Some of our leaders, who were initially opposed to the return of the
ex-VP, had shown enough understanding in the past few months.”

Meanwhile, a chieftain of the All Progressives Congress, Alhaji Kehinde
Olaosebikan yesterday said the exit of Atiku would not have any
significant effect on the fortunes of the party in the 2019 general
elections.

He said no serving governor, no presiding officer of the National
Assembly or key national executive officer of the party was in sync with
Atiku’s defection.

Olaosebikan who spoke with journalists in Abuja yesterday said in spite
of the defection, President Muhammadu Buhari would win hands down and
that the party would perform better in 2019.

He added: “Going through the resignation letter, I found out that the
Turaki did not exercise enough fortitude. He allowed politics and
ambition to take control of him. He should have stayed with his avowed
position in 2013 that the All Progressives Congress was his last bus
stop politically, and leave the rest in the hands of Allah.”

“What the President needs from us, particularly the big political
players is love, understanding, support and prayers as already being
exhibited by the National Executive of the party and our National
Leader, Asiwaju Bola Ahmed Tinubu who at different fora recently gave us
hope and assurances of a better tomorrow.”

When asked of the declaration of Asiwaju Tinubu that the party would not
give automatic ticket to President Buhari for a second term,
Olaosebikan told journalists that the position of Tinubu was in the best
interest of the President, APC and the country as a whole.

“Asiwaju, with the declaration of no automatic ticket was merely
portraying the President as a genuine democrat who believes in due
process. What Asiwaju Tinubu said was in support of strengthening our
democracy and our political institution which we need to do with all
seriousness.

“You would recall too, that he stated that all the organs of the party
would support him through the processes. In a nutshell, he is in full
support of his second term and you know with him, all the APC governors
and the presiding officers in the National Assembly, the ticket is
already in the pocket of the President.

“And when it comes to the general election, it is a platitude that you
cannot compare the popularity and acceptability of President Buhari with
that of any person in the country today. He will win in the North and
in the South convincingly. Buhari is not loved for money or any material
thing; he is passionately loved for his strong character and
piousness.”