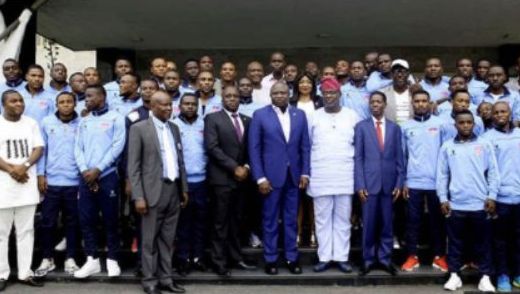 Governor Akinwunmi Ambode of Lagos State has donated N50 million to
members of the Mountain of Fire and Miracles Ministry Football Club (MFM
FC), as a form of encouragement for their impressive performance at the
Nigeria Professional Football League last season.

Ambode announced the donation when he received the footballers and staff
of MFM FC along with top officials of the Nigeria Football Federation
at the statehouse in Alausa.

He applauded the team for qualifying for the CAF Champions league holding next year.

He donated N25m to the players and officials for qualifying for CAF
Champions League and another N25m to ensure hitch-free campaign as well
as adequately prepare for the tournament.

“We have directed the Lagos State Sports Commission to make sure that
everything needed to ensure that Agege Stadium is certified by CAF for
champion league is done,” Ambode said on Wednesday.

The Governor said the State Sports Commission had been directed to
ensure that the Agege Stadium which is the home-ground of MFM FC, be put
in good shape to meet up with the CAF standard before inspection in
December.