by Tony Orji
in INews
Reading Time: 6 mins read
A A
0
Share on FacebookShare on TwitterShare on Whatsapp

Will the iPhone X change your life for the better and usher you into the future, face first? Or is it just another smartphone with a giant screen and a strange little rectangle on top?

We’ve only had the phone since Monday morning. It’s more than the few minutes of hands-on time reporters had when the device was launched, but a day is not enough time to fairly review the iPhone X. It’s like deciding if you want to marry someone after one blind date.
So while we test, tinker and tap this week, here are some first impressions to whet your appetite, presented as yearbook superlatives:
Most likely to annoy you 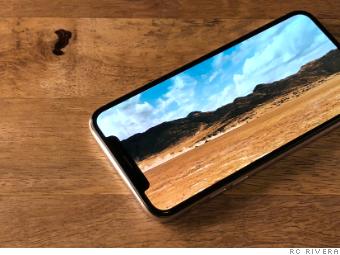 Call it what you like — a cutout or a notch — but the area around the new front-facing cameras and sensors is definitely a black mark on the iPhone X’s screen. In the battle over bezels (the frame around a smartphone screen), Apple seems to have gone a little too far to push its screen to the very edges of the device.
If you watch a widescreen movie, you can shrink it down so everything is visible and get a box just barely larger than what you’d see on an iPhone 8 Plus. But if you double tap it to fill the screen, the black bar will block out a tiny bit of the image. The corners of the screen are also rounded, gently shaving off any corners of apps or content.
In an era when all smartphones look nearly identical in their cases, you could argue the black bar gives the iPhone X screen a distinctive look. But I’d rather just watch my movie without a little gap in the display.
Hardest to warm up to
Face detection is the iPhone X’s signature feature. Setting it up is easier than adding a fingerprint. It works, but seems to slow down the unlocking process. It’s one of those things I’ll need more time to get used to before I decide if it’s actually an improvement of just a gimmick to make the iPhone X seem futuristic enough to justify all the hype and that $1,000 price tag.
Most attractive new addition
It’s you! Your face can now get the “Portrait Mode” treatment when using the front-facing camera. Also known as the “selfie” camera, it’s now able to mimic the same shallow depth-of-field effect as the back camera. A perfect time-sucking addition for selfie fans.
Oddest security issue
Apple hopes you don’t have an untrustworthy identical twin. The company says its face detection feature is far more secure than fingerprint sensors, with a one-in-a-million chance of someone fooling it. However, the company acknowledges that it can be tricked by identical twins. It’s also not as effective for children under 13. That could be disappointing for any pre-teens planning to drop a thousand dollars on a smartphone.
Most likely to be forgotten (a k a, The class clown) 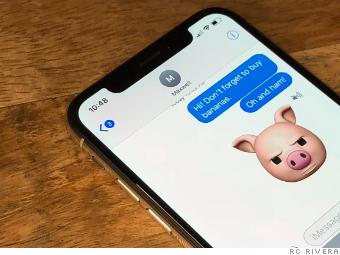 Ironically, the under-13 set is the group most likely to enjoy texting animated pieces of sentient poop to their pals. Apple’s new Animoji feature uses the face detection technology to animate 12 popular emojis in Messages, including a robot, a unicorn, a pig and a fox. It’s cute!
Developers can use the same technology in their own apps. Snapchat is one of the first, with masks that map to your face. The Face ID camera has a ton of fun potential just waiting to be tapped by other apps, but I suspect the novelty of Apple’s Animoji will wear off quickly.
I could be wrong. We might be communicating entirely in animated emojis in five years, in which case I will apologize with an appropriately humbled animated unicorn head.
Most delightful detail you’ll never notice 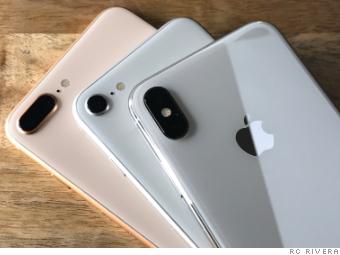 To set it apart from the iPhone 8, the back of the X has an “optical layer” that adds a subtle glimmer to the glass surface, which is designed to work with inductive charging devices. Unfortunately, if you break the glass on either side, it will cost more to replace on the iPhone X than previous models. You’re safest keeping it in a case and missing out on the shine.
Biggest inconvenience
The new and improved Control Center was my favorite addition in iOS 11. But things have shifted on the iPhone X to work around the missing Home button. To bring up the control center, you need to tap and drag down from the top right corner of the screen. It’s not thumb friendly, unless you have unusually long thumbs. When it appears, it’s higher on the screen than when you swipe up. One clumsy workaround is to use the Reachability setting, which moves everything on the screen down.
We’re still testing out the phone and will be back later with a full review and a camera comparison. The iPhone X arrives in stores Friday. There’s already a lengthy wait for online orders, but you might be able to get one in person at an Apple Store or retailer.
CNNmoney
Tags: INews
Previous Post