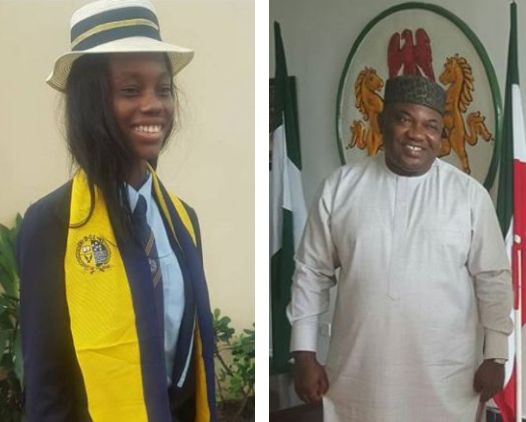 Governor Ifeanyi Ugwuanyi of Enugu on Wednesday honored another indigene
of the state, a 16-year-old student of Dowen College, Lagos, Miss
Nnenna Eneh, who scored A1 in all the nine subjects she sat for in the
2017 West African Examinations Council (WAEC) exam.

Recall that Enugu State recently honoured Miss Cynthia Chinecherem Ali,
the best graduating student of Shalom Academy Nsukka in 2017, who had
same result in recognition of her performance.

Addressing newsmen at the state executive council meeting, Commissioner
for Education, Prof. Uchenna Eze, who was accompanied by his counterpart
in the Ministry of Information, Mr. Ogbuagu Anikwe and the student’s
father, Mr. Fidelis Eneh, said that Gov. Ugwuanyi expressed delight at
the brilliant performance of Miss Eneh, adding that the state government
was thrilled by the number of its indigenes that are “doing wonderfully
well” in academics.

The commissioner disclosed that the state government honoured her with a
cash gift and certificate of recognition as an ambassador of Enugu
State, stating that the gesture will motivate her further to do better
in her future endeavours, as well as spur other young ones to work
harder.

Meet Nigerian Woman Who’s A Lieutenant in the Israeli Army