Black Lady Delivers WHITE Child. How Did It Happen?

by Tony Orji
in Entertainment
Reading Time: 3 mins read
A A
0
Share on FacebookShare on TwitterShare on Whatsapp 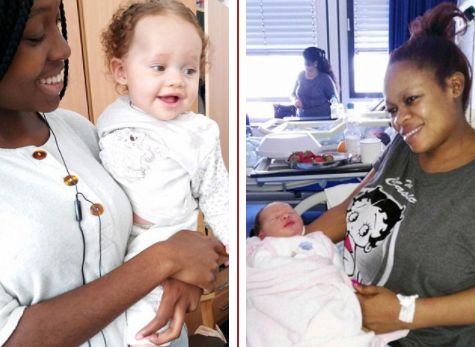 A black
mother-of-three who gave birth to a pale-skinned red-headed child with piercing
blue eyes has been left baffled.

Doctors are equally stunned, raising concerns Andrea
might have a skin disorder when she took her in for a routine
check-up.

But now she
can’t take her daughter out in public without being stopped – but not just
because of how
adorable she is.

The former office worker thought her
daughter’s creamy complexion would darken since her other daughters –
15-year-old Faith and 17-year-old Lucricia – inherited her skin tone.

But
instead, the mum-of-three said Andrea’s blue eyes, striking auburn hair and
milky skin is turning heads wherever they go in their hometown of Hanover,
Germany.

Patience said: “I couldn’t believe it. Her skin was too white
when she was born, I was sure it would tone down, which happens sometimes, but
it hasn’t.

“It wasn’t until a few days after she was born I started to
think: ‘Hold on, her skin was white. I’m her biological mother and I’m
black’.

“Every time we go out I get questioned or stopped for
photographs. I’m running out of things to say to people. She’s the centre of
attraction.”

She added: “My doctor was totally surprised. He even tested
her for a skin disorder out of concern for how pale she was. My friends keep
joking that a mother is out there looking for their baby, and one day they will
find us.”


Patience, who conceived the Faith and Lucricia with her black former
partner, moved to Hanover after meeting new partner Andreas in
Zimbabwe.

She traced her ancestry but said there was no white heritage in
her family.

However, geneticists have suggested this could be what lays
behind the striking contrast to her daughter’s skin tone.


Dr Bryce Mendelsohn, a medical geneticist at the University of
California, said: ‘People of African descent have traces of European in their
ancestry, especially from populations with many geographic origins, so that
could be the case here.

‘The child is distinctly lighter than her mother,
but of course there is another parent to consider. Children often resemble one
parent more than the other.

‘When we pass on our genes to our kids they
can be skewed either way, it’s what makes us unique.’


Martin Delatycki, clinical director of the Victorian Clinical Genetics
Services in Australia said: ‘If someone with dark skin procreates with someone
of light skin, the child’s skin colour will generally fall somewhere between
them on the spectrum.

‘There is not one gene for skin colour, and there
are many complex genetic influences and subtle change that can impact the
outcome.’

‘If two dark-skinned people conceive a light skinned child,
this would usually be due to a form of albinism, but this does not appear to be
the case here judging by the child’s hair and eye colour.’

End time: Couple Just Discover They Are Siblings After 24 Years

Joblessness Inspired Me To Be A Cobbler – Nigerian Lady