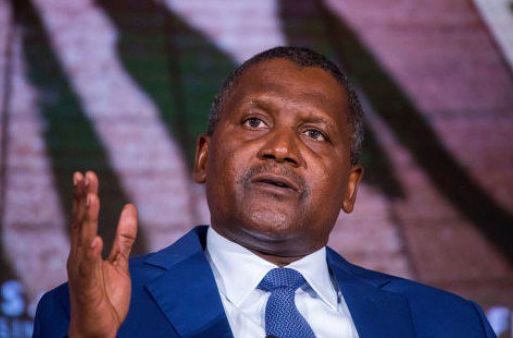 Aliko Dangote, Nigerian businessman and richest man in Africa, says his
refinery which is under construction will be completed in the last
quarter of 2017.

In an interview with Bloomberg, the chief executive officer of Dangote
Group shared his business ideals and the next step for his business
empire…

Here are 10 key topics he touched on:

REFINERY IN 2017
Dangote says his refinery, which would refine 650,000 barrels a day, would be among the largest in the world.

“We didn’t really realize that we were going to need almost 70 million
cubic meters of sand. But we are catching up, and I’m sure we’ll be able
to deliver it by the last quarter of 2017.

“We have actually never failed in delivering any project. We always
deliver our projects on time and at cost. If we hadn’t delivered our
projects on time, that would be something. We will definitely deliver,
by the grace of God.”

LIFETIME PROJECT
To Dangote, the refinery is his lifetime project and he is backing it up with his own life to make sure it is delivered.

“We are using our own money. This is my lifetime project. I have to back
it up with my own life to make sure it is delivered. I know that, yes,
it’s true, a lot of people have tried to deliver on refineries in the
past, mostly governments. They couldn’t.”

HE DOESN’T DO SMALL THINGS
By 2025, Dangote says he would have investments worth $50 billion in the US and Europe.

“Beginning in 2020, 60% of our future investments will be outside
Africa, so we can have a balance. We are looking at petrochemicals but
can also invest in other companies.

LEARNT FROM THE MEN WHO BUILT AMERICA
“I never worry about being too bold. In business it’s good to be aggressive, but with a human face.

“I thought at first I was really aggressive until I watched this show,
The Men Who Built America. I realized that actually they were much
bolder than us. Someone like Vanderbilt, he built 50,000 miles of rail!
That is a very bold move. That’s why anything we do, we don’t do it
small. If there’s any human being who has done this equally, I am equal
to the task to do the same. I actually have a sign on my desk that says,
‘Nothing is impossible’.”

NO INTEREST IN TELECOMS
Aliko Dangote says he has no interest in the telecoms industry, his reason being that he is late to the party.

“When I look at telecom, for instance, I think that would be very tough
for us. We are a little late. Some players have been in this market for
17 years already. There’s no way you can go and jump over somebody after
17 years of their hard work. So I think we would pass when it comes to
telecom today.”

HE WISHES HE INVESTED IN TECHNOLOGY
Dangote says he’d have loved to invest in tech, especially because
companies in that industry get bigger valuations than industries like
agribusiness.

“Look at the US, the way the tech companies are getting massive. And
it’s still nothing compared to the GEs, yet those don’t get that kind of
valuation. I wish that we’d entered tech, but our concentration has
always been in Africa.”

ARSENAL ON THE WISH-LIST
Another thing on the wish-list of the 60-year-old businessman is to buy Arsenal football club.

“I don’t change clubs. Even when Arsenal isn’t doing well I still stick
by them. It’s a great team, well-run. It could be run better, so I will
be there. I will wait. Even if things change I will take it and make the
difference going forward.”

NOT INTERESTED IN POLITICS
Dangote says he has no desire to go into politics because he loves his freedom too much to lose it.

“I’m not interested. There’s quite a lot we can do from the business
side. I enjoy a lot of what I am doing, and I also love my freedom—and I
don’t have too much. The little I have, politics would take away. I am
not ready to give that up. There are businessmen who are interested in
politics. I’m not one of them.”

INTEGRITY IS HARD TO COME BY
When asked of the human flaw that frustrates him the most in business, Dangote says it’s integrity.

“In Africa, you normally need to know who you’re dealing with. You have
to make sure you’re dealing with very honest people who have
integrity—that’s why we have so few partnerships. Dangote itself has
plenty of headaches to take care of.”

PREFERS MAKING MONEY TO SPENDING IT
In Dangote’s words, he doesn’t like to throw away money and has no home outside Nigeria. He likes a simple and quiet life.

“I’m not a person who just likes to throw away money. I spend more money
on charitable things than myself. I actually don’t have any home
outside Nigeria. I stay in hotels. Quiet. Simple. My life is not very
lavish, and I actually get very embarrassed if I try to show that I have
money.

“In Lagos, I drive myself around on weekends. I ask my driver to go
rest, and then I drive myself around. I still visit my normal friends I
grew up with. My house is open 24 hours a day for them. I mingle with
everybody. That’s the only way to get to know what’s going on.”