Samsung’s boss is sentenced to prison

Unlike other jailed chaebol bosses, he may not be pardoned 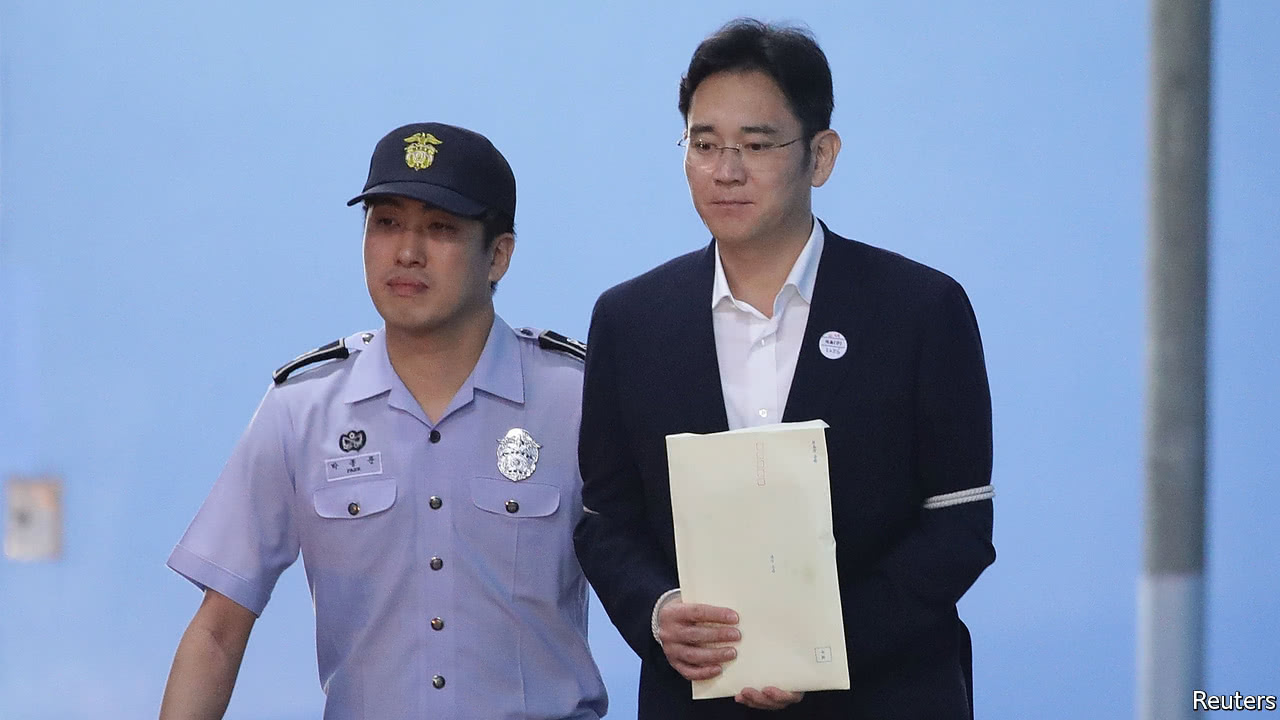 SAMSUNG’S founding family, the Lees, have good reason to dislike room 417 of Seoul’s Central District Court. In 2008 it was where Lee Kun-hee, the chairman of the sprawling South Korean conglomerate, was found guilty of tax evasion. On August 25th his son, Lee Jae-yong, the vice-chairman of Samsung Electronics, stood in the same room and was sentenced to five years in prison on charges including bribery, embezzlement and perjury. The elder Mr Lee has been in hospital since suffering a heart attack in 2014. Samsung now lacks both its official and de facto bosses.
The younger Mr Lee, who plans to appeal against the verdict, was accused of paying bribes to Choi Soon-sil, a confidante of the country’s former president, Park Guen-hye. Prosecutors had argued that he hoped the payments would secure government support for an $8bn merger of two Samsung affiliates, Cheil Industries, the group’s unofficial holding company, and Samsung C&T, a construction firm. The state-run National Pension Service, the single biggest shareholder in C&T, voted for the plan in July 2015. The deal was controversial, but it helped Mr Lee consolidate his control over the group and clear the way for his succession.
The decision is a milestone in a broader influence-peddling scandal that brought down Ms Park. She was impeached in March and arrested soon after; she now awaits the verdict in her own trial. Mr Lee’s conviction bodes poorly for her.
Less clear is what will happen to Samsung itself. Shares in Samsung Electronics, the group’s main earner, dipped by 1.05% following the verdict. Yet any slump may be fleeting. The group’s three chief executives were not caught up in the trial. While Mr Lee was awaiting the verdict in his case, the firm boasted record profits, thanks to booming demand for its memory chips. An analysis by the Asan Institute, a think-tank in Seoul, showed that each twist in the case had little impact on its share price. Last year had brought the disastrous release of the Galaxy Note 7 smartphone, which had an unfortunate habit of bursting into flames. But the firm unveiled a new model this week. Its share price has risen by more than one-third this year.
Yet Mr Lee’s absence could create a power vacuum at the centre of the group, which might prevent it from making big bets. “The good thing about having a founding family is they can think about the long term,” says Yoo Kyung-Park of APG Asset Management, a Dutch pension firm that owns shares in Samsung Electronics. The Future Strategy Office, which acts as the group’s control tower, was dismantled in February after Mr Lee’s arrest. Two of its former executives were also jailed. Bosses will be unwilling to make major decisions without the family’s sign-off, says Park Sangin of Seoul National University: “In a monarchy you need a king.”
One convicted South Korean boss, Chey Tae-won of SK Group, a telecoms and chemicals giant, avoided this problem by turning his jail cell into an office. While serving time for embezzlement earlier this decade, he held more than 1,600 meetings in 17 months. In theory Mr Lee could do the same. But the appetite for such behaviour is waning. Demands are intensifying to reform South Korea’s chaebol, the mighty conglomerates that helped forge the country’s economy but which are now often criticised for cosy ties with politicians. Byzantine structures allow the sons and grandsons of company founders to wield great influence, whether or not they have controlling stakes. The 26 Samsung affiliates, which operate in businesses from life insurance to smartphones, are controlled by the Lee family through a complex web of cross-shareholdings.
So Mr Lee, if his conviction is upheld, may not be able to run Samsung from prison. Nor would he be likely to be freed early. In the past, bosses could rely on politicians to get them out of trouble. Mr Chey, the elder Mr Lee and Chung Mong-koo, the chairman of Hyundai Motor, who was nabbed for embezzlement, have all received presidential pardons. Mr Lee is unlikely to get such special treatment. Moon Jae-in, Ms Park’s successor, has promised to tame thechaebol and stop doling out pardons. He may be as good as his word.
Source: The Economist
Tags: ICT UpdatesNews
ShareTweetSendShareSend
Previous Post

In China, singing Handel’s “Messiah” is forbidden in public